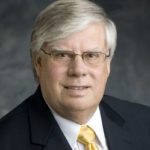 Holzheimer, who turned 66 last month, died of a heart attack. A McLean resident, Holzheimer has served as Arlington’s top economic development official since 2005.

“Terry’s family has informed me that Terry died today of a heart attack,” Donnellan said. “I am deeply saddened by this tragic news. Our hearts go out to Terry’s family.

“Arlington has lost a dedicated public servant and a leader who worked for decades to build one of our nation’s most successful and stable communities,” Donnellan said. “Terry was respected across this region as a leader in economic development. His many accomplishments can be seen and felt across our County.”

“This is a double tragedy for Terry’s family,” Donnellan said. “Just six weeks ago, his wife of 34 years, Mary Benedette Pelletter-Holzheimer, died after a long illness.” Terry is survived by his daughter, Francesca, and her husband, Joseph Hammerstrom.

The family has not yet announced funeral arrangements.

Before coming to Arlington, Holzheimer served as Loudoun County’s director of economic development from 1989-96. His career also includes heading a management consulting firm, Development Advisory Service, Inc., that provided services to local governments throughout the country in housing and economic development. Earlier, he worked for the National League of Cities, consulting with city and county governments on redevelopment and rehabilitation programs.

Holzheimer has a Ph.D. from George Mason University in public policy, with a specialization in regional development. He holds a B.A. in economics from the University of Florida. He is a member of American Institute of Certified Planners (AICP) College of Fellows and is certified in economic development by the International Economic Development Council. He is a member of the adjunct faculty at Virginia Tech, teaching in Urban Affairs and Planning.