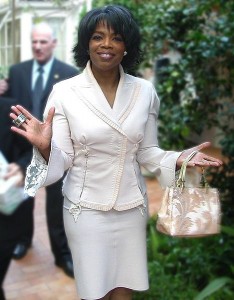 Winfrey will headline Chatman’s fundraiser, which will be held somewhere in Arlington on Saturday, April 5, according to the campaign. The event will also “feature several prominent leaders speaking on women’s issues, globally, nationally, and in the 8th District of Virginia.”

“Oprah is a good friend and we both share a passion for empowering women and girls for leadership,” Chatman said in a statement. “I’m delighted she is coming to town to help with my congressional campaign.”

Chatman is the former President and CEO of the Northern Virginia Urban League. She held her campaign kickoff event at Arlington’s Army Navy Country Club on Feb. 12.

So far, the Chatman campaign says it has raised $200,000 in the race to replace Rep. Jim Moran in Congress. The race includes nearly a dozen candidates vying for the Democratic nomination.