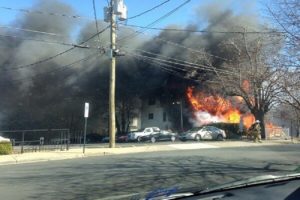 The victims of the house fire that claimed two lives in Nauck on March 15 have been identified as Yvonne Barrie and Bobbie Nelson Goins.

Barrie, who was 73 when she died, had lived in the house for two years before the fire, according to her neighbor Roxie Johnson. Johnson said Barrie’s son had built the house and died three years ago, after which Barrie moved into the house.

The next day, March 16, would have been Barrie’s 74th birthday, Johnson said.

Goins, who was 77, had escaped from the fire before going back into the house to try to save Barrie, according to witnesses. He did not live at the house and Arlington County Fire Department spokeswoman Lt. Sarah Marchegiani could not release details of their relationship.

The cause of the fire is still under investigation, Marchegiani said, and there is no timetable for when the Fire Marshal will release the findings.