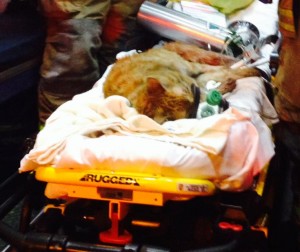 Arlington County firefighters rescued a cat from a townhouse fire early this morning.

Firefighters were called to a home on the 4400 block of Pershing Court in the Barcroft neighborhood around 4:45 this morning for reports of a fire. Units arrived six minutes later and found flames coming out of a front window on the top floor, according to Arlington County Fire Department spokeswoman Lt. Sarah-Maria Marchegiani.

The blaze was quickly extinguished but firefighters found a cat inside the home in “respiratory distress,” Marchegiani said. The cat, which was foaming at the mouth as a result of smoke inhalation, was brought outside and given oxygen. It was then transported to an animal hospital — the VCA SouthPaws Veterinary Specialists & Emergency Center on Route 50 — where it is now listed in stable condition.

There were no human injuries as a result of the fire. The blaze caused about $50,000 in damage.

Investigators are still trying to determine the cause of the fire, which started in an upstairs bedroom, according to Marchegiani. Other than the cat, the home was unoccupied — its residents were on vacation at the time.

More Stories
Residents, Nonprofits Line Up to Request Taxpayer FundsNOVA Legal Beat: Is Being Called ‘Sexy’ Grounds for a Lawsuit?