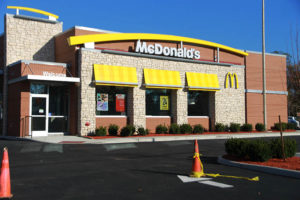 McDonald’s restaurants in Arlington and the rest of the D.C. area will be offering free coffee during breakfast time to its customers starting Monday, March 31.

The promotion, which will run for two weeks, will include a “‘Make Friends with McCafé’ sampling events at high traffic locations and transportation hubs in multiple cities across the country. The events will provide busy commuters with free McCafé coffee and a few surprises along the way, such as live musical performances, spontaneous comedy experiences and more,” according to a McDonald’s press release.

“McDonald’s has long been part of the Greater Washington, DC community, and we wanted to show our appreciation by inviting guests to start their mornings with a complimentary cup of McCafé Coffee,” area McDonald’s owner and operator Nick Nerangis, Jr. said in the release.

The McDonald’s in Arlington are located at: