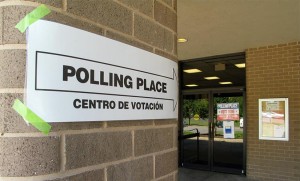 It’s the eve of the Arlington County Board special election and the four candidates are gearing up for a final push for votes.

Arlington polls open at 6:00 a.m. tomorrow and will remain open until 7:00 p.m. Voters who are unsure about where they can vote can go to the Virginia State Board of Elections polling place search function. Other questions about voting tomorrow can be answered on Arlington County’s election website.

Arlington Treasurer Frank O’Leary, who doubles as an election turnout prognosticator projects the total voter turnout to be between 30,000 and 33,000 after the latest absentee ballot count came in at 1,910.

Campaign contributions and candidate efforts have ramped up in the final week and the leading contenders, Howze and Republican- and Green-endorsed independent John Vihstadt, say they’re looking forward to tomorrow.

“Voters are really responding to our message of progressive values, community investments, and high quality local government services,” Howze told ARLnow.com in an email this afternoon. “We are working hard to make sure voters know that there is an election and what is at stake. We have knocked on thousands of doors and made thousands more phone calls and will continue right through Election Day to get the word out.”

Vihstadt acknowledged the difficulties he faced running against a Democrat in Arlington, but said he’s “encouraged” heading into tomorrow.

“I am the underdog, but am very encouraged and up-beat going into the election,” Vihstadt also wrote in an email. “This has been an uphill battle against the status quo from the start, but our grassroots campaign of volunteers from multiple parties has tapped a groundswell across the County that we need to elect a new independent voice and restore some balance to our County Board in a constructive, bridge-building manner.”

Howze and Vihstadt both said the voters they’ve spoken to appreciate candidates knocking on their doors. However, Vihstadt says voters want a candidate who “speaks to local issues that the County Board has power to address and will provide a new, independent voice and someone who will ask questions and not just nod his head.”

Howze said voters told him “they want leaders who share their values on equality, economic opportunity, and expanding access to healthcare. I also learned that voters, especially those with school-age children, recognize the value in having a Member of the County Board who actually has children currently in APS.”

Regarding his electoral odds on Tuesday, independent Stephen Holbrook wrote “it isn’t important as to how I feel about my chances for victory… If I am not elected the only losers will be the people of Arlington County who will be hurt by more higher unjustified taxes and more poor leadership type people on our board.”

At publication time, Independent Green candidate Janet Murphy had not responded to a request for comment sent earlier this afternoon.