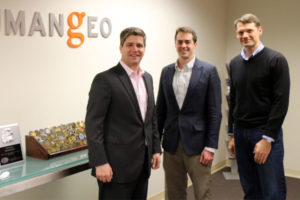 When launching a service-based technology startup, it helps to be able to walk into a meeting and own the room.

Al DiLeonardo and Abe Usher, the co-founders of HumanGeo, rarely have to worry about that. The two met in 2007 when DiLeonardo, working for the U.S. Army Special Ops Command (SOCOM) visited Google’s D.C. headquarters to try to recruit technology talent for a new data project.

Sitting in their new office conference room on the top floor of a Ballston startup, DiLeonardo shrugs and admits he might be the only person to have walked into a Google office hoping to lure people away. Most of the employees laughed it off, but Usher — a graduate of West Point and former NSA cryptologist — chased DiLeonardo down in the parking lot and accepted the job.

“Abe became known in special command as Google Boy,” DiLeonardo, the CEO, says with a chuckle.

In 2011, DiLeonardo retired from SOCOM and, soon after, Usher left with him to launch HumanGeo, which takes much of what the two were doing for the military — using geospatial technology and big data analytics to gain strategic advantages — and privatized it. 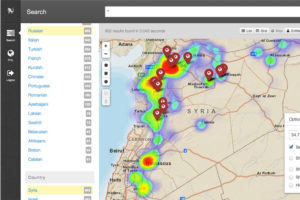 “We work with digital human geography, which is understanding the intersection of people and location,” Usher, the chief technology officer, says. “We’re trying to derive insights from data and the most simple way to do that is from location. We maximize the geospatial aspects of data.”

One of HumanGeo’s first clients was the government of the United Kingdom in 2012. HumanGeo was hired to ensure the London Olympics — which generated controversy because many locals were opposed to hosting the games — could operate smoothly.

Since then, HumanGeo has grown exponentially. Half of its business, DiLeonardo says, comes from the Department of Defense, primarily in the area of disaster relief and security; DiLeonardo declined to get into further specifics of HumanGeo’s various defense contracts. The other half is designing tools to let large companies — from banks to video game makers — make sense of vast amounts of data.

“Where we excel is identifying where there’s a problem and building applications to solve that problem,” DiLeonardo said. “For banks, one of the services we offer is using internal and external data to make sense of why a client leaves the company so the bank can offer better services.” 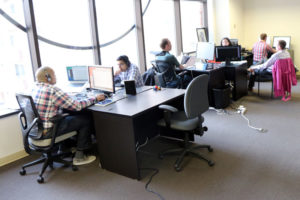 HumanGeo is completely bootstrapped and profitable, DiLeonardo said. Within a year of launching, HumanGeo had a team of 10 members and an office in Clarendon. Now, HumanGeo has 45 employees and even has a spinoff company in New York called Signifier, which is tasked with taking some of HumanGeo’s products and “going big with them in social media.”

While HumanGeo was initially launched as a technical services company, it’s since grown in a number of directions, but with one common factor: data. Vast amounts of it.

“The government needs to derive more value from the data they have,” Usher said. “They’re looking for more data-driven decision-making. That’s why even as government spending on the whole may be reducing, expenditures in data are growing.”

DiLeonardo is also a former NSA cryptologist — his path and Usher’s never crossed until that day at Google — and the fact that HumanGeo’s two founders came from NSA had venture capitalists in Silicon Valley “practically throwing money” at them, DiLeonardo says while chomping on beef jerky from a giant bag. 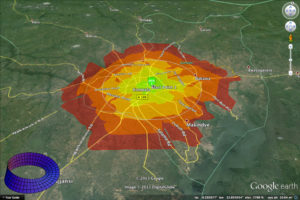 “Game knows game,” DiLeonardo said, quoting a line he heard Ice-T say in a Jay Leno interview. “That’s how we’ve gotten to where we are. We’ve become known, liked and trusted in the government space  and we’ve been able to attract a great team because we’ve had interesting work.”

The CEO says locating in Arlington has been a key to securing both talent and clients. Most of HumanGeo’s 45-person team was recruited through word-of-mouth, and DiLeonardo and Usher gush about how talented the people they work with are.

“About a year ago, an Ivy League graduate who has an engineering degree from Stanford and is a woman asked for a job,” DiLeonardo said with a huge grin before leaning forward and slapping his hand on the table. “That’s how I knew we’d arrived.”