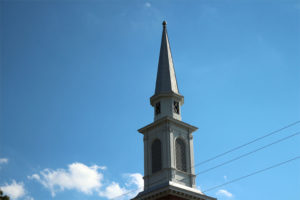 Mike McMahon worked for some 30 years as a music director for parishes in the conservative Roman Catholic Diocese of Arlington. For those 30 years, no one seemed to care that he was gay, as long as he was “discreet.”

As reported by the Washington Post, the 62-year-old was fired last summer from St. Agnes Catholic Church in Cherrydale — not because he’s gay, but because the pastor there found out he had gotten married to a man.

News of the firing has some in the community crying foul.

“It saddens me that certain religious denominations are unable to express and embrace love fully,” Arlington County Board Chair Jay Fisette told ARLnow.com. “Their position is anachronistic and uninformed at best, and very hurtful and damaging to many people at worst.”

By all accounts McMahon was good at his job and didn’t let his marriage interfere with his work responsibilities. Is it proper, though, for a church to fire those whose personal lives go against church teachings?