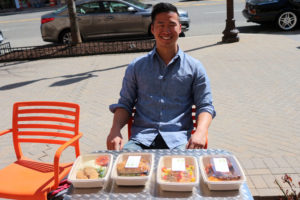 A couple of years ago, Hanson Cheng, equipped with a love of gourmet food borne in his father’s restaurants, was in “the worst shape of his life.”

All of the decadent food he’d been eating had caught up to him. He admits he didn’t know much about nutrition before joining a Crossfit gym. It was there he learned about the Paleo diet, and the pounds started dropping fast.

That transformation is what inspired Cheng, who lives in Ballston, to found his startup The Green Spoon. The Green Spoon is a food delivery service that takes online orders in advance and delivers chef-prepared, locally sourced organic, gluten-free food.

Here’s how the concept works: at least a week before the customers want the meal, they order it online from The Green Spoon’s website. They can choose which day they want it, and which meal. Lunches are $12.95, dinners are $16.95 and kids meals are $8.95. 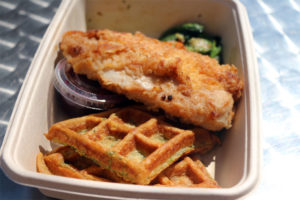 After the orders come in, Cheng and his partners talk to their farm partners, who deliver the fresh produce to the chef a couple of days later. The chef, Donn Souliyadath, then cooks the meals and Cheng is usually the one personally delivering them on the day they were requested.

“I wanted a gourmet meal service with healthy options, but around here you either need to eat salads or go to restaurants and order the same things again and again,” Cheng told ARLnow.com while sitting outside Buzz Bakery in Ballston, where Cheng spends many of his days running the company. “Our menu rotates every day. People can eat healthy and not have it the same way all the time.”

Cheng is 33 years old and said he was “entrepreneurial from the get-go,” starting his own financial consulting business immediately after graduating from Virginia Tech. At the start of the recession in 2008, he said he left that job the begin flipping houses, which turned into a multi-million dollar business with dozens of properties a year and several investors. 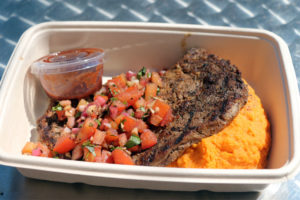 “At the end of last year, I had enough capital to start something I was really passionate about,” Cheng said. “I initially wanted to launch in March, but there was a lot of buzz around my friends and family, so I did a soft launch in December and it was very successful.”

Cheng said he interviewed a dozen chefs before deciding on Souliyadath, who he found through a Craigslist ad. Souliyadath was working as a personal chef in Great Falls, for a catering company and in a restaurant when Cheng brought him on full-time. Now the two work together to build a menu of, Cheng hopes, 40-50 menu options for each meal.

“A lot of talented young chefs work their asses off under big-name chefs in restaurants without recognition,” Cheng said. “Chefs are like artists, they want to create their own meals, their own recipes. Donn figured out what I wanted and we work together well.” 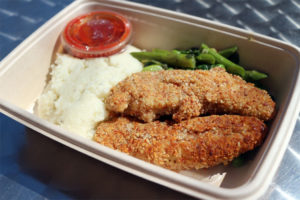 Cheng bootstrapped the company and hasn’t taken investment even though he said it’s been offered. The Green Spoon breaks even now, although Cheng doesn’t take a salary yet. Right now, the only neighborhoods the Green Spoon serves are Arlington, Old Town Alexandria and northwest D.C.

Cheng said he initially thought his main client base would be young people who want to follow a Paleo-like diet. But, he’s found his primary customers are mothers, which is why he and Souliyadath developed a kids menu.

Cheng is already eyeing growth areas — “obviously I want to grow as quickly as possible, but my partner wants us to scale slowly, so it’s going to be a mix” — and if the company can grow to serve the full D.C. area, he thinks cities like Denver, Charlotte and Atlanta would be ripe for Green Spoon expansion.

First things first, Cheng needs to stabilize his customer base here. He’s finalizing a partnership with a growing gym company that he thinks will “be a catalyst” for growth, and he’s already looking at new partnerships for more kitchens.

“I though [founding a startup] would be so much harder,” he said. “As a financial advisor, everyone hated the cold calls. In this industry, if you have a cool concept, everyone wants to help.”