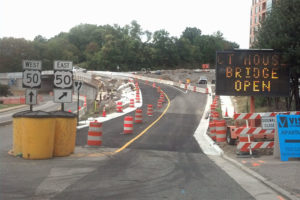 Several ramps that have been under construction for years as part the Route 50, N. Courthouse Road and 10th Street N. interchange project are scheduled to open later this month.

The westbound frontage from Route 50 to 10th Street N. will still have barriers on it but will open a few weeks later, McCord said.

There will still be some intermittent lane closures on Route 50 until the project wraps up by July, McCord said. The $39 million interchange began construction in April 2011 and was originally scheduled to be completed by fall of 2013, but the project was delayed, apparently to make sure traffic could continue to flow on Route 50 during construction.