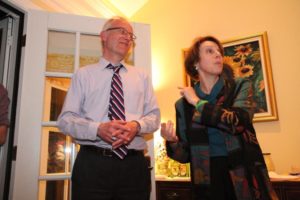 Local Democrats are upset with Garvey over her outspoken opposition to the streetcar and her support of Republican-endorsed independent John Vihstadt in the County Board special election. Vihstadt defeated Democratic nominee Alan Howze earlier this month. Garvey was elected in 2012 on the Democratic ticket and now in her first full term on the County Board, following a decade and a half on the School Board.

At the committee’s meeting Monday night, Garvey will have a hearing where she can defend her decision to support a non-Democrat and appeal to stay a member of the Arlington Democrats. The hearing will be heard by a special committee made up largely of the ACDC leadership, according to ACDC Chairman Kip Malinosky. Malinosky said he will be presenting the case against Garvey, so he recused himself from the committee.

Malinosky said he’s received more than a dozen complaints about Garvey’s activity — which include a $1,000 donation from her campaign committee and regular emails to her campaign mailing list supporting Vihstadt — and added that he asked her to voluntarily remove herself from the ACDC during the campaign, which she declined.

“It’s crazy to have a voting member of our organization actively working against the purpose of the organization,” Malinosky told ARLnow.com. “You can do anything you want as a Democratic committee member. You can take any position on the streetcar or other issues, but the one thing you cannot do as a member is to endorse, support and assist a non-Democrat against a Democratic nominee. That’s the only thing you can’t do.”

Garvey said that even if she is removed from her position, she will still consider herself a Democrat and, if nothing were to change, would run for re-election in three years as a Democrat without the ACDC’s endorsement.

“We all wear different hats in life,” Garvey told ARLnow.com this morning. “I’m in an odd position because the only reason I’m on the committee is because I’m an elected official and a Democrat. I found myself in a spot where I had two loyalties. I am a member of ACDC and an elected official of Arlington County and I have to represent the voters. I made the decision in the best interest of the voters as I needed to do to fulfill my responsibility to them.”

Garvey said she wanted to have a hearing to explain her rationale for supporting and donating to Vihstadt’s campaign. She said she didn’t want to simply accept leaving the ACDC because she “didn’t want anyone to think that I want to leave ACDC.”

“It’s like in a family, you can have disagreements with members of your family, but you don’t leave your family,” she said. “I’m hoping all of this in the end will make ACDC stronger. I hope it’ll be a healthy thing for all of us. I really have the best interests of ACDC at heart.”

Malinosky said if Garvey wants to stay a member of the ACDC, she’ll have to change course and throw her support behind Howze for the November general election rematch against Vihstadt.

“I would love her to say ‘I’m willing to support Alan Howze and all the Democrats,'” Malinosky said. “If she says that, then welcome back.”

After the jump is the email Malinosky sent to ACDC members:

An unprecedented situation has arisen in the past few months. As Chair of the Arlington County Democratic Committee (ACDC), I have received numerous complaints that Libby Garvey, an elected official and voting member of ACDC has taken actions that are prohibited under DPVA and ACDC rules. The allegations, which are all a matter of public record, are as follows:

The Arlington County Democratic Committee (ACDC) is governed by the rules of the Democratic Party of Virginia and its own bylaws. Under those rules, which are available here, a voting member of the ACDC shall be removed, after notice and an opportunity for a hearing, if such a member has violated or failed to uphold the responsibilities of membership.

In accordance with these rules, I have notified Ms. Garvey that engaging in such actions requires her removal from ACDC. Rather than resigning or accepting removal from ACDC based on these facts, Ms. Garvey has elected to exercise the procedures our rules provide for her to contest truth of the charges. Accordingly, as required by our rules, I will appoint a Special Committee to meet and consider the matter of Ms. Garvey’s continued membership in the ACDC.