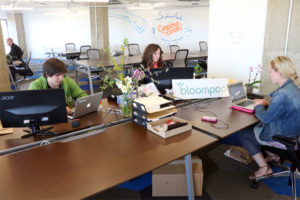 (Updated at 1:30 p.m.) Shavanna Miller has always loved flowers, and has a passion for supporting local businesses. Until last year, those were merely interests and hobbies.

Today, those interests and hobbies have spawned Bloompop, an e-commerce platform that lets customers browse and purchase flowers from some of the best local florists in their city. Miller said she was tired of seeing local florists struggling while national flower delivery companies delivered inferior products.

“It’s always clear the difference between a local florist and a big national chain,” Miller said. “It’s a much better value and the difference in quality is incredible.”

Miller originally had the idea when she was working in community develop New York City for Meetup six years ago. It wasn’t until late in 2012 — when she was in charge of U.S. digital sales for Rosetta Stone in Rosslyn — when a friend of hers gave her an angel investment to chase her dream. Her last day at Rosetta Stone was Dec. 31, 2012.

Miller hired a developer last March and a designer a month later. By the summer, Bloompop was in beta mode, helping deliver flowers around the D.C. area, but before that, Miller had to convince local florists to partner with her, despite having no product to show them and no customers yet on board. 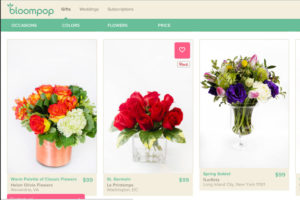 “Florists have been screwed over for years by different entities,” Miller said. “Getting the first one or two well-known florists was helpful. If you’re a florist in D.C., you know who the other good florists are.”

Bloompop’s first partner was Ultraviolet Flowers in D.C. “I basically had to speak with them four or five times to convince them to sign up,” she said.

Once the first florist or two was on board, Miller and Bloompop formed a system for dictating which florists to choose. She goes on multiple online review sites and only selects those with four- and five-star ratings, and considers florists that have creative arrangements and are willing to work with Bloompop’s universal pricing structure: every arrangement costs $69, $99 or $129, and the delivery fee, no matter where the recipient is, is a flat $10, even for same day delivery.

“A lot of the complaints in the flower industry is how non-transparent the price is,” she said. “A flower website will run a $30-for-roses sale, but after delivery, convenience and other fees, you wind up paying $70. With our site, you can easily compare what you’re getting from different florists because the price points are consistent.” 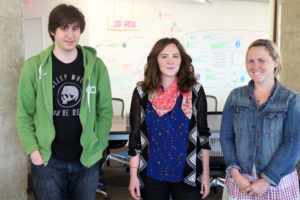 Bloompop’s official launch was in September, by which time the company was based in D.C.’s 1776 incubator. Now, Miller and her small team have a workspace in the new Crystal Tech Fund in Crystal City, although they are the one company there that hasn’t yet reached $1 million in annual revenue. Miller said Bloompop was accepted into Crystal Tech Fund because its founder/investor, Paul Singh, sees promise in the company.

Miller said the company set a sales goal before it looked into expansion, and hit that goal within three months. Now, Bloompop is either launched, or soon will be launched, in New York City, Chicago, Atlanta, Kansas City, Mo., and Sarasota, Fla.

Miller determined which cities to launch in next by tracking the zip codes entered on the site that returned no results. It’s ideas like that — which she said she developed early on — that have solved for Bloompop most transactional (money-for-goods) startups’ biggest hurdle: finding customers.

“That comes from my background in digital marketing,” Miller said. “You can’t make decisions like that if you’re not tracking your data.”

Bloompop’s next product is a natural step for any flower business: Bloompop Weddings. The new vertical will target brides on a budget, or those who would prefer to spend their time planning other parts of the weddings. The arrangements are $300-500, and the color palette and design can be browsed online.

“Florists like the detailed consultations, but they’re very time-consuming,” Miller said. “There’s another market that doesn’t fall into that category. Maybe the wedding isn’t a year from now or the bride doesn’t want to spend thousands of dollars on flowers.”

Bloompop is “on track for profitability,” Miller said, but the company has set its sights distinctly higher than that.

“The competition I’m looking at is the big guys with $1 billion in annual revenue,” she said. “I would like to take a chunk of that.”