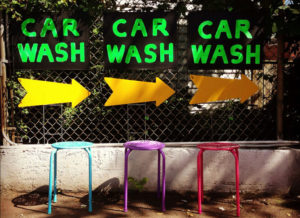 (Updated at 2:40 p.m.) Teams, clubs and activity groups at Arlington Public Schools have been banned from doing car wash fundraisers because of stormwater regulations.

According to the county’s Department of Environmental Services, APS was issued its first stormwater permit by the state last month, after more stringent stormwater regulations were passed by the Virginia General Assembly in July 2013. The permit disallows all charity car washes on school property.

Washington-Lee, Yorktown and Wakefield High Schools notified their teams and clubs this week that they were no longer allowed to conduct such fundraisers.

“There is an important underlying reason why most types of car washing are not allowed under state and federal stormwater regulations,” said DES spokeswoman Shannon Whalen McDaniel. “The chlorinated water, detergents, petroleum products, and other pollutants that get washed into the storm drain system are carried into our local streams, the Potomac River and ultimately, to the Chesapeake Bay. As a result, there are educational and environmental benefits that come with finding new and environmentally friendly ways to raise money for extracurricular activities.”

However, some coaches are concerned that, particularly for the more expensive sports, the ban could have negative repercussions for the athletes.

“This could have a large impact on fundraising by sports teams/boosters/school clubs in need of dollars to support the school programs,” one Washington-Lee coach, who preferred to remain anonymous, told ARLnow.com. “I am not sure how many teams are affected by this new rule. I know that my team will be, since every little bit helps deal with the expense of our sport as we try to support the kids.” 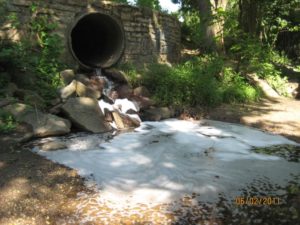 A few years ago, the ban may have had a greater impact. But Wakefield Activities Director Noel Deskins said none of the schools teams or clubs have held car wash fundraisers there for years. Instead, they opt for bake sales, pizza sales and other money-raising endeavors.

“I think it’ll be a little easier here adjusting to the new policy,” she said.

The new regulations passed by the state last year prohibit smaller public entities, like APS, from conducting car washes, according to DES Watershed Programs Manager Jason Papacosma. All car washes that aren’t for personal use require a specific permit or written determination from the state, even charity car washes held on private property.

“Working with APS, we plan to continue educate entities looking to hold such events about the rules and environmental impacts,” Papacosma said, “and work to suggest alternatives that can raise funds and also protect the environment and comply with the environmental protection rules we are both required to follow.”