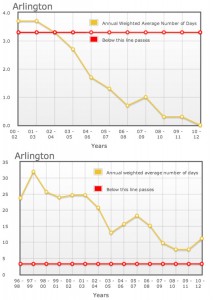 Arlington’s air again received an “F” grade for smog from the American Lung Association’s annual “State of the Air” report, with days of high ozone pollution increasing over last year.

ALA’s last report in 2013 said that Arlington experienced an annual average of less than 10 days of smog that were “unhealthy for sensitive populations.” In the most recent study period, that number jumped to 11.2 days per year. A weighted average of four days is considered a passing grade.