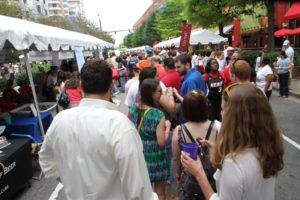 This Sunday’s Taste of Arlington festival in Ballston will fill the streets with food from 46 local restaurants.

The annual event will be held from noon to 5:00 p.m. Packets of 10 food and beverage tickets for are still on sale for $35.

Responding to high demand in previous years, Taste of Arlington will have a larger beer and wine pavilion this year. Located on Wilson between N. Randolph and Quincy Streets, the pavilion is billed as having “seating and plenty of space to dance.”

Aside from eating and drinking, Taste of Arlington will feature a number of different activities and entertainment option.

A “Bark Park” will provide a space for festival goers and their dogs, complete with pet supply vendors and a Corona beer station. For $10, dog owners can enter their pooch in a “World Pup tournament,” which features a 70-foot race track and a doggy-sized soccer goal.

Before the festival kicks off, organizers will be holding a Girls on the Run 5K race, described as “Northern Virginia’s most family friendly 5K.” A number of roads in the area will be closed from 10:00 to 11:30 a.m. to accommodate the race.

There will be other traffic impacts in Ballston as a result of the festival. Wilson Blvd between N. Glebe Road and Quincy Street will be closed from midnight to 8:00 p.m. to accommodate the booths, as will N. Stuart Street between Wilson and 9th Street N. Parking will also be restricted in the area.

The full list of breweries and restaurants that will be serving at Taste of Arlington, after the jump.