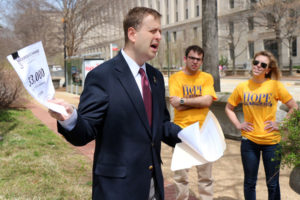 Del. Patrick Hope, one of seven candidates for the Democratic nomination to replace retiring Rep. Jim Moran (D-Va.) in Congress, fell down stairs while campaigning this weekend and sustained fractured ribs.

According to his campaign, Hope was canvassing Sunday morning in the Woodlawn neighborhood of Fairfax County when he fell. He was taken to Virginia Hospital Center and diagnosed with one broken rib, multiple fractured ribs and some “ugly bruising,” his campaign said in a press release.

“I am resting comfortably at home in Arlington now,” Hope said in the release. “I’ve knocked on 13,000 doors in the last five years, and dealt with a few misjudged stairs, a dog bite and a couple of ankle sprains and never missed a beat. A rib break will cause me to miss some time on the campaign trail however.”

Hope is the only remaining candidate in the Democratic race who lives in Arlington. His six opponents in the June 10 primary — Don Beyer, Lavern Chatman, Bill Euille, Adam Ebbin, Mark Levine and Derek Hyra — all live in Alexandria. Hope had previously planned to visit every precinct in the 8th District, which covers all of Arlington, Falls Church, Alexandria and parts of Fairfax County, but he announced those plans will have to change.

“I am committing today to personally call voters in those precincts I am unable to visit,” Hope said. “When I thought about those who are uninsured and need our help — I decided that the campaign will go on.”

Hope is a healthcare attorney who works as the senior director of legislative policy for the American College of Cardiology, and he has vowed that, if elected, his first actions in Congress would be to defend Obamacare and to try to institute universal healthcare.