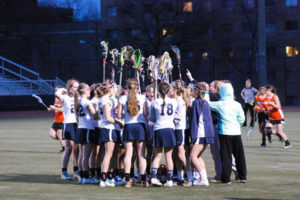 (Updated at 1:00 p.m.) The spring sports season is over for all but the elite teams, like Washington-Lee boys soccer and Yorktown boys lacrosse, which are still hoping to raise more banners in their gyms.

The Generals’ boys soccer team is in the midst of one of its best seasons ever, sporting an undefeated 16-0 record with three ties. It took home the Liberty Conference 6 championship last week and continues its march to the state tournament at home against Stonewall Jackson tomorrow night.

Washington-Lee girls soccer (10-3) also took home the Conference 6 title, defeating Yorktown before losing in the opening round of Region 6A North action, 4-2, to Centreville last night. The Patriots soccer squads both lost just three times this season, and their years wrapped up in similarly heartbreaking fashion: both squads lost in double-overtime last night in the opening round of the regional tournament, the boys to Centreville and the girls to Robinson Secondary School.

Wakefield’s boys soccer team is still playing after turning around what could have been a disappointing season. The Warriors were the runner-ups in the Conference 13 tournament after losing six straight games before the tournament began. They play Leesburg’s Tuscarora in Region 5A North action tomorrow night to try to keep their improbable postseason alive.

Yorktown’s boys lacrosse team, after losing to state powerhouse Langley in the conference champion, secured a huge win last night in the opening round of the regional tournament, blowing by Oakton 12-5. They’ll face South County at a neutral field, Robert E. Lee High School in Springfield, tonight at 7:00 p.m. The Patriots girls lacrosse team — also a Conference 6 runner-up — saw its season come to an end last night at the hands of Robinson, 22-12.

Washington-Lee baseball, despite going just 11-11 in the regular season, managed to make a deep run in its conference tournament and qualify for regional play. Arlington’s only remaining baseball team in action will hope to keep its season alive at 3:30 p.m. tomorrow in Chantilly.

Wakefield’s softball team is also still alive after a 10-9 season and a 15-1 loss to eventual conference champion Marshall in the Conference 13 semifinals. Their season continues on the road in regional tournament play tomorrow at 6:00 p.m. against Massaponax.

After the jump, the records and results for Wakefield, W-L and Yorktown’s major varsity team sports.

Photo via Washington-Lee athletics. Records compiled from school websites and All Met Sports