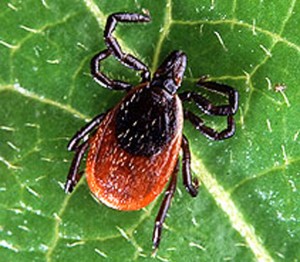 While the frigid winter delayed it a bit, tick season has arrived in Arlington, according to the local Virginia Cooperative Extension office.

Several ticks have been found around Arlington and Alexandria, according to VCE staff. All of those found so far have been dog ticks, which could carry Rocky Mountain Spotted Fever. Other ticks that are common to Virginia, but not found in Arlington so far this year, include the lone star tick, which can carry ehrlichiosis, and the deer tick, which can carry Lyme disease.

VCE says anyone who suspects a tick-transmitted disease should talk to a doctor.

The organization has the following advice for residents.

Ticks are best removed with tweezers or by wrapping the tick in tissue paper and pulling out with fingers. Pull slowly to avoid leaving the mouthparts in the wound; do not twist or jerk. Do not use nail polish, petroleum jelly, alcohol, or hot matches to remove the tick. Wash the wound with an antiseptic after the tick is removed. Kill the tick in rubbing alcohol and keep it in a small vial for a few months in case any disease symptoms develop.

The Virginia Department of Health also recommends the following methods of prevention:

While the VDH also recommends keeping pets outside from April to September to help keep ticks out of the house, both dogs and cats should be checked often before entering a home to ensure that they don’t carry ticks inside. Safe and effective tick control for pets is available.

Residents with tick-related questions can contact the local Virginia Cooperative Extension help desk. The help desk is staffed from 9:00 a.m. to noon weekdays at the Fairlington Community Center (3308 S. Stafford St.) It can also be reached by email at [email protected] and by phone at 703-228-6414.

Photo via U.S. Department of Agriculture