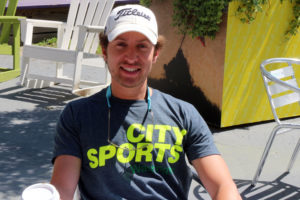 Rosslyn resident Ryan Booth knows golf is “an old school game,” but his technology startup venture hopes to take the leisure sport into the modern era.

Booth is developing TeeBoxPro as combination handicap tracker/social network for golfers. He graduated from business school at George Washington University last month and works full-time in finance for the General Services Administration, but he’s been devoting nights and weekends to building his product.

The germ of the idea began when Booth was taking a class called “e-entrepreneurship,” and he had to come up with an idea for a new tech business. He had already worked with the U.S. Olympic Committee during the 2012 London Olympics, and knew he wanted to do something sports-related. He started thinking about the Google Doc he and his friends use to update and compare each other’s golf scores.

“My friends and I are always trying to figure out how well each other are doing and what courses we’re playing,” he said, noting several members of the group are spread out across the country. “I realized there was really nothing out there to make golf social online. There’s a void in the marketplace.”

At first, TeeBoxPro was designed as a golf social network, but as the idea and the designs evolved, it has turned into a much more powerful tool. When the product launches — which Booth expects to happen in the fall — it will have a handicap tracker built off the algorithm of the U.S. Golfers Association, which tracks official handicaps. Golfers can usually only find out their handicap by being a member of a country club or paying for a service online, but TeeBoxPro plans for the service to be free.

In addition, the handicap tracker will be rolled into a ranking system, not unlike those used by fitness apps like Nike+ or MapMyRun, for competing among friend circles. It will also have social functionality, with users being able to check in at golf courses, upload photos and video and, Booth hopes, earn promotions from golf courses that sponsor the app. 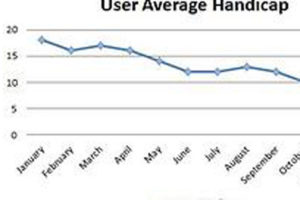 “There is currently a void in the golfing market for a tool this integrated,” Booth said. “There are tracking apps like GolfLogix, and it has a social component, but it’s terrible. Nobody uses it. Golf is a competitive sport, but it wouldn’t be unless you’re in a foursome or a tournament.”

Booth said he’s done weeks of on-the-ground market research, talking to golfers old and young at courses around the D.C. area, like Hains Point, Bull Run and Top Golf in Alexandria. He said he plans to return to these places with an app, and letting those golfers beta test it, as well as encouraging courses to partner with TeeBoxPro.

Booth said he hopes to be testing the product “by the tail end of golf season” and to have a full “MVP” product in “no less than six months.” Booth knows his company’s biggest challenge will be getting users, which is why he doesn’t plan on selling TeeBoxPro as a “new golf social network.”

“We’re going to market this is a free handicap calculator,” he said. “We’re going to get a lot of people testing it, get them to feel it out, and hopefully we’ll be able to use their feedback to improve.”

The big potential for the company long term, Booth believes is in the data. That’s why he and his co-founder, Sam Rud, a software engineer based out of Denver, are seeking outside help to build the back-end. Down the road, the potential for growth on the product side is seemingly endless.

“We want to get big into data analytics,” Booth said. “We can measure shot length, incorporate course tracking, and all that allows for game analyzing. You can look at the data and know where to practice, know which clubs to use for which distance, and improve.”

At some point, Booth said he hopes TeeBoxPro is purchased by a golf course management company or a golf product company like Titleist or TaylorMade, but that will depend on the success of the app and the viability of its data. “Once I have the data, I can go to firms, point at it and I won’t have to do much talking.”

Before any of that happens, the app has to launch and the company has to grow from its two part-time employees to something more substantial. Booth now plans to devote the time he was using for business school to get the app across the home stretch. Although he has big goals, his main ambition is a simple one.

“I’m not actually doing this to make money,” he said. “It’s about putting a product out there that people will use. This is exciting because I want to use this damn tool.”