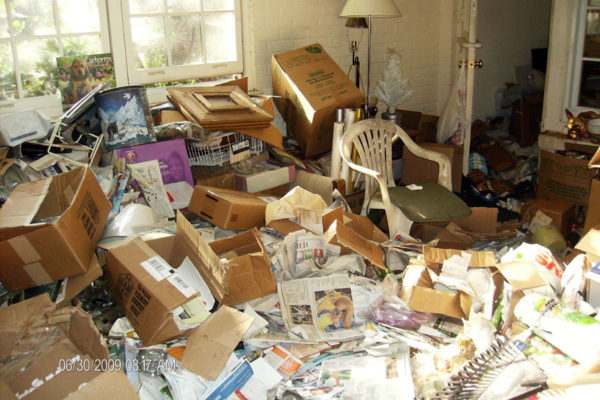 Reginald Lawson, Arlington Department of Human Services’ supervisor of Adult Protective Services, oversees the department’s handling of hoarding cases, and he has a favorite story he likes to tell from his work.

“There was this person with some severe hoarding going on, and he had to be placed in a care facility,” Lawson said. “This person had such a great support network, they went through as a team and cleared out his place. There might have been one person who organized the clothes, another person went through the refrigerator. It may have taken a month, but the person was brought back to their home.”

Lawson sits on Arlington’s Hoarding Task Force along with staff from the Arlington County Fire Department and Arlington Code Enforcement. The three departments all deal with cases of hoarding throughout the county, depending on what the situation calls for. According to DHS spokesman Kurt Larrick, ACFD responds when there’s a fire hazard or medical emergency, Code Enforcement responds when there’s a building code violation and DHS gets involved if the hoarder has health, psychological or mental issues.

Hoarding entered the popular consciousness largely from the reality television program “Hoarders” on A&E, which documents cases of extreme hoarding and shows interventions to try to get the hoarders to change their ways. The vast majority of hoarding cases, however, are not filmed for TV nor do they often even make the news. There are about 40-65 hoarding cases per year in Arlington alone, officials say.

Hoarding, which is a problem in communities across the country, was thought to be a symptom of obsessive compulsive disorder as early as 1980. It was recognized as its own mental health disorder in the Diagnostic and Statistical Manual of Mental Disorders last year.

“When I came here eight years ago, my supervisor was one of the mental health experts on hoarding,” Lawson said. “I thought it was a term that we coined within Arlington County. We used to call hoarders ‘pack rats’ back when I was growing up in Louisiana. At the bare minimum now, people are more aware it’s an issue and a real disorder.” 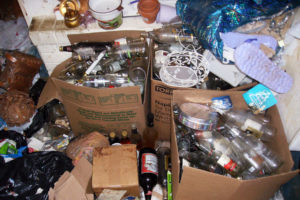 The Hoarding Task Force was formed in 2003, and Patty Durham, DHS’s assistant director, has served as its chair for the past nine years. She emphasizes that the task force is just a place where representatives from the three agencies get together to talk about the cases they’ve worked, and serves exclusively as an administrative body.

“The discussion we have is sharing information about what’s happened so far in the case, so we know where we’re starting from, then we’re talking about where or when there’s an intervention,” Durham said. “If there’s [mental] competency or not competency, that comes into play. You can’t do things against people’s will if there’s competency. It’s a matter of understanding where the case is and understanding what can be done.”

Hoarding calls typically run the gamut from a false alarm of someone who has an unusually cluttered yard or apartment, to extreme cases where papers, boxes and other items are stacked in every room in the house, blocking doorways and endangering the structural stability of the building.

According to the International OCD Foundation, studies have shown that about 4 percent of the population suffers from hoarding disorder. Larrick said “The line between a messy lifestyle and hoarding is usually crossed when the person’s ability to function adequately is compromised.”

“If someone is no longer able to cook meals at home, if they can’t live safely in their own home or if they pose a safety risk to others,” are indicators that an individual has a hoarding problem, not a clutter problem. “Most people hoard items because they think the items have value and don’t want them to go to waste. Many hoarders consider themselves information junkies so the items they hoard tend to be newspapers, magazines, brochures and other information-rich items. Emotional attachment is the third most common reason for hoarding. Objects can have a sentimental association to important persons, places or events in the hoarder’s life.”

No matter how extreme the hoarding case is, there’s no situation in which county officials from any department partake in disposing of the collections, Durham said. That job always falls on the residence’s occupant or owner, and sometimes the county must threaten hoarders with fines in order to bring their homes up to code and safety standards. 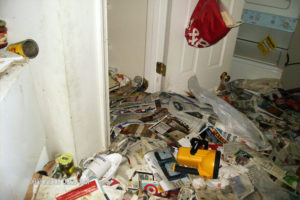 If a hoarder is deemed mentally incompetent, he/she is dealt with differently, but one way or another, the clutter must be cleaned.

“We’ll run into a problem when they’re refusing to address the problem, and that’s when code and fire, depending on the severity, can take a more authoritative and, sometimes, an even adversarial approach,” Lawson said. “You can say you may be attached to this collection, but the sheer amount is affecting your safety or the safety of those around you. That’s where you have to draw the line.”

Lawson’s favorite story exemplifies what he views as the best response to hoarding: involve the family or a personal support system. Sometimes the hoarder is mentally incapacitated and the family is needed to deal with the belongings. Other times, there’s a medical condition preventing them from dealing with increasingly accumulated items.

“It’s really about a support network. That typically yields the best results with hoarders, especially the ones that are the most severe,” Lawson said. A distant part of that network is the relatively unknown Hoarding Task Force, which Lawson says works together and enjoys good interdepartmental chemistry. “It’s a really good working relationship, and it’s nice to be at the table with people from other disciplines who get it. At the end of the day, it’s really about the safety of the Arlington citizens.”