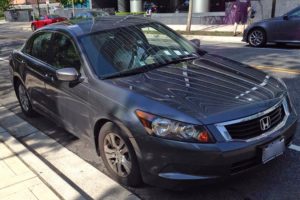 The Virginia Dept. of Motor Vehicles today sent cease and desist orders to Uber and Lyft, ordering the popular ride-sharing services to stop operating in the Commonwealth.

The DMV asserts that the smartphone-based services, which allow drivers to make money by using their own cars like a dispatched taxicab, are illegal because they have not received the proper authorization from the DMV to operate in Virginia.

In letters to company officials, the DMV says it will “enforce existing laws by companies… and by individual drivers that lack authority to provide passenger transportation.”

Tonight the Arlington County Police Department said it plans to assist in that enforcement, effective immediately.

“We will enforce it, but it will not be a primary focus of our operations,” ACPD spokesman Dustin Sternbeck told ARLnow.com. “We are going to take a soft approach, but we will not turn a blind eye.”

Sternbeck did not clarify how, exactly, officers plan to single out Uber and Lyft drivers for enforcement. While Uber drivers typically operate discreetly, with nothing to outwardly distinguish their vehicles, Lyft drivers are supposed to drive around with a large, pink moustache attached to their car’s grille.

Jon Liss, Executive Director of Tenants and Workers United, which has been rallying local cab drivers against Uber and Lyft, applauded the DMV’s action and called on the Arlington County Board to do more to protect cab drivers.

“It is time for Arlington to get in sync with the state DMV and enforce one set of rules for all taxi-like services,” he said. “Drivers in Arlington deserve ‘dispute resolution’ protections and fair and enforced regulations.”

“The DMV’s decision to crack down on Lyft and Uber is reprehensible,” said AFCYR Chairman Matthew Hurtt. “During his campaign, Governor McAuliffe emphasized the importance of efficient government and transportation in making the Commonwealth the best place for business. Yet, less than six months into his term, he stands idly by while his administration cracks down on a thriving industry that not only brings jobs to the region, but also provides safe and efficient transportation at an affordable price.”

“The DMV should withdraw their cease and desist letter along with their preposterous interpretation of this law,” Hurtt concluded.