Two kittens rescued by the Animal Welfare League of Arlington have become Internet sensations thanks to a viral video (above), filmed and posted by their foster parents.

The video shows the kittens nodding their heads in a synchronized “dance,” seemingly along with the beat of the hit song “Turn Down for What,” by DJ Snake and Lil Jon.

Daisy and Tulip are eight weeks old and are still available for adoption, according to AWLA Executive Director Neil Trent. The video, posted on May 29, has already accumulated more than 3 million views, but Trent said despite people calling with interest about the two kittens, the shelter has yet to receive any formal adoption applications. 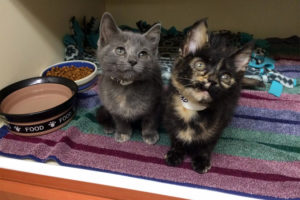 Daisy and Tulip, sisters found abandoned when they were less than a week old and their eyes were still closed, are scheduled for surgery to get spayed on Thursday, but Trent said anyone can come in and visit this afternoon, Wednesday or after the surgery on Friday to see the two felines.

“We haven’t had anything that’s gotten this kind of reception,” Trent told ARLnow.com. “Occasionally we’ll post something on YouTube of a cat or a kitten. I think it may be stimulated a bit because the writer of the song is a rap guy named Lil Jon and he Facebooked about the video. Maybe that’s what helped it go out into the ether.”

Daisy, the tortoiseshell-colored kitten, and Tulip are two of about 25-30 kittens currently residing in AWLA’s new feline shelter, along with 45-50 cats, Trent said. There are also about 50 kittens in foster families, where they live until they’re about eight weeks old and are ready to be spayed.