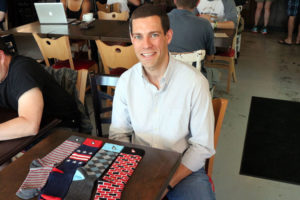 (Updated at 12:40 p.m.) Brad Christmann was yearning to start a company when he graduated from business school in 2012, but he could not think of a viable idea.

That’s when his brother reminded him of an idea he had as a 9-year-old for reversible socks. Christmann quickly recognized the reversible idea wasn’t going to work, but the idea of a sock company stuck in his head.

This morning, Christmann launched the Kickstarter for his startup, Boldfoot, selling $12 pairs of American-made socks with eclectic designs.

“I really wanted to do something in the startup space, but didn’t have an idea I loved,” he said. That’s when his brother reminded him of his sock idea. “Socks are endlessly creative. It’s a nice, low-cost product with limited risk to test it out with a bunch of different patterns.”

The socks aren’t reversible, but Christmann said they are all made in the U.S., with a cotton, nylon and spandex blend in a manufacturing plant outside of Philadelphia. He’s banking that the designs — which he created himself — the material and what the company stands for will resonate with Kickstarter investors and, one day, customers.

Along with being made in the country, Christmann plans to donate a dollar from every purchase to a charity dedicated to helping homeless veterans with jobs, training and housing. His full-time job is in digital marketing for Capital One, and he’s applying many of the principles he learned there, and in business school, to Boldfoot. 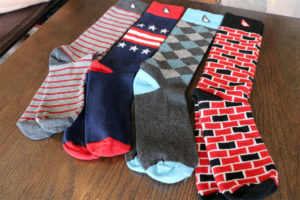 “I tried to build the company around passion points,” he said. “It’s American-made, they’re designed in school and team colors, and we’re pro-veteran. It’s about finding how to promote your company in a very targeted way.”

Originally, Christmann said he was “adamant I wasn’t going to use Kickstarter. I wanted to do it the old-fashioned way.” He took several of the designs he created to different manufacturers, all of whom told him his company and his orders would be too small for them to produce.

He said the reality check of the difficulties of finding a manufacturer was something he expected, but not to the degree he experienced.

“I didn’t know the manufacturing was going to be that tough,” he said. “It was like they’ll work with me when they have nothing better to do. It wasn’t until I shelled out two grand to make some samples I had any sort of agreement.”

The designs for the samples Christmann made came from random places of inspiration. He would walk down the street and see a brick pattern on a building and take a photo to turn it into a sock (far left in the above picture). Because of the patriotism imbued in his company, he made sure to have several red, white and blue designs.

“I had a three- or four-month period where everywhere I went, I saw patterns,” he said. “I’ve never had any formal design training, but I’m good enough at Photoshop to be dangerous.” 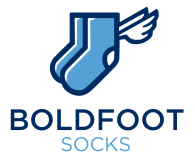 “If it falls flat, so be it,” he said over coffee at Northside Social last week, near his home in Clarendon. “I have tepid, baited enthusiasm. I’ve invested a few months of my life into something I’ve truly enjoyed.’

Christmann envisions Boldfoot socks being carried in some small- to moderate-sized local stores within a year. In the future, he has ideas of partnering with teams and schools for branded socks, making compression socks for athletic activities. If he can achieve that, he knows his vision will have been validated.