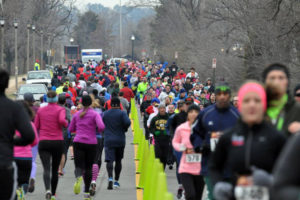 (Updated at 2:00 p.m.) The Shirlington Running Club turns 5 years old today, a milestone for the club that has grown from a handful of runners to more than 2,500 members today.

This evening, the running club is throwing its fifth anniversary party at its usual post-run watering hole, Bungalow Sports Grill (2766 S. Arlington Mill Drive). The club’s runners participate in its 5K runs on Tuesdays at 6:30 p.m., then heads to the restaurant for happy hour.

Mirentxu Meyer and Shirley Santos founded the running club when Santos was training for a triathlon, and, seeing as how they “hated to run,” they figured they would start a community group to make it a little more fun.

“Shirlington is a really young place with new families,” Meyer said. “We [saw] a lot of cuties out at the grocery store and we wanted to bring them out.”

The club was designed as a “not too intimidating and not too easy group,” and it’s grown exponentially as runners sign up to have their attendance tracked, earn free T-shirts with attendance milestones and enjoy a few beers with their running counterparts at Bungalow. Meyer said people “don’t have to be a runner” to join the club, and their attendance will still be taken.

Tonight, at 6:30 p.m. the party will include raffles with prizes like free tickets to a show at Shirlington’s Signature Theatre, a shoe fitting with New Balance and 10 vendors on hand to offer their wares to members both new and old.

There will be a rain date later this week — yet to be announced — if the run is cancelled due to the inclement weather in the forecast, but that won’t stop the carousing. Four years ago, at SRC’s first anniversary party, the skies opened up during the raffles, Meyer said.

“All of a sudden there was a big crack and there was a crazy downpour,” she said. “There was no power left, but the beer kept pouring.”