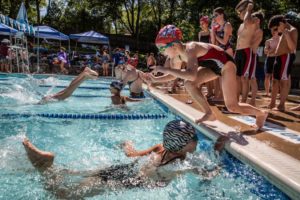 (Updated at 11:55 a.m.) The Arlington County Board is scheduled to decide on Saturday whether to reduce the surcharge for non-residents who participate in gymnastics and swimming  leagues that use county facilities.

When the Board adopted the FY 2015 budget in April, it approved a 50 percent surcharge for participants not living in Arlington to participate in clubs like the Arlington Aerials, the Arlington Tigers and the Arlington Aquatics Club. According to the county, the surcharge resulted in annual fee increases for those clubs of between 12.9 and 30 percent.

The Board will deliberate over County Manager Barbara Donnellan’s recommendation to reduce that surcharge from 50 to 30 percent in FY 2015, with plans to increase the charge to 40 percent the following year and up to the adopted 50 percent in FY 2017.

Parks and Recreation spokeswoman Susan Kalish said the county received a fair amount letters and complaints about the adopted price increase, which led the staff to reconsider.

“Parks and rec staff met with a group to come together with options to move forward,” Kalish told ARLnow.com.