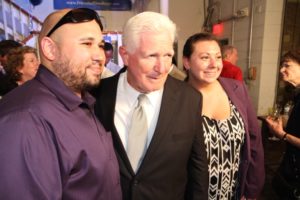 The result stunned the political world, as did Brat’s convincing margin of victory: 56 to 44 percent.

It has also been suggested that Cantor spent too much time in D.C. and not enough time in his Richmond-area district. Cantor maintains a condominium in Arlington, near Pentagon City, public records show.

Rep. Jim Moran (D-Va.), speaking to ARLnow.com outside of Don Beyer’s victory party in Alexandria, said he had just seen Cantor on the House floor earlier that day and was “shocked” that he was voted out of office, presumably by the same conservative voters that Cantor had tried so hard to court over the years.

“Compared to this guy Brat, Eric was so much more competent, informed, and showed leadership in his party,” Moran said. “I disagree with his positions but between the two of them he was by far the more accomplished, capable statesman.”

Moran marveled at the irony that someone regarded as a “young gun” conservative leader was apparently considered not conservative enough by Republican voters.

“He was very conservative,” Moran said. “If you’re conservative, he’s the guy you should have voted for, not some guy to doesn’t know what he’s talking about. Eric is very much anti-immigration… I was bitterly opposed to his position. But the idea of voting against him because he wasn’t sufficiently anti-immigration is nonsense.”

In a press release Wednesday morning, the Democratic polling group Public Policy Polling claimed voters in Cantor’s district actually support immigration reform, but were unhappy with Cantor and with the GOP leadership in the House.

“Both Cantor and the GOP House leadership are deeply unpopular, even with Republican voters, and that likely led to his loss,” Public Policy Polling concluded, based on a poll conducted Tuesday night.

“I think the fringe of the Republican Party is taking over the party,” Moran said. “The Republican Party has lost control, it has a tiger by the tail and it can’t rein it in. It’s bought in to the Fox News and the hate radio stuff and now it’s out of control. You need some government, and yet these people want no government. ”

Moran said redistricting in Virginia might have hurt Cantor.

“When you gerrymander a district so you only put conservatives in there, you don’t get a balanced district and this is what you get,” he said. “I think a more moderate district, it turns out, probably would have been in his favor. But Eric didn’t want a moderate district, he wanted as much concentration of conservatives as possible, and this is what he wound up with.”

Despite the fact that the news about Cantor was a couple of hours old, Moran, who is retiring after 12 terms in the House, was still battling disbelief.

“Wow, isn’t that something,” he reflected.