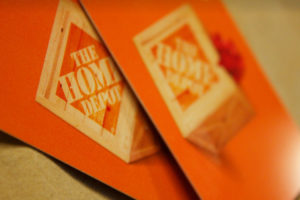 An Internal Revenue Service impersonation scam has victimized some Arlington-based immigrants, threatening them with deportation unless they drive to Home Depot and add money to pre-paid gift cards.

“So many people already got in trouble,” Shamim Naseer, who received one of these calls, told ARLnow.com. “One of my friends said he paid them $6,000.”

Naseer said that at least four people she knows, including her son, got a call from someone claiming to be an IRS agent. One of her friends, Naseer said, got a call six months ago. The caller in each case told them to add money to gift cards within 10 to 20 minutes or else they would “get in trouble.”

“Some people just don’t know what to do,” said Naseer, who runs an in-home child day care service called Sunshine Day Care in Arlington. The scam may seem obvious to long-time American citizens, but is less so to “recent immigrants who are still figuring out how the tax system operates in this country,” said Sara Barker, a daycare client of Naseer’s.

An identical scam robbed a South Florida woman of $6,000 earlier this month, and a March press release from the Treasury Inspector General for Tax Administration said that thousands of people were victims of similar scams.

When Naseer got her call Wednesday, she knew not to believe the scam artist because customers from her sons’ Halal grocery store on Lee Highway warned her after receiving calls of their own, she said. She kept him on the phone so she could report details of their call to the police and the IRS.

After giving her a fake name, phone number and IRS ID number, the man asked Naseer if she had a lawyer. “Tell me what I did wrong first and then I’ll tell you if I have a lawyer,” Naseer said she told the caller. He said that Naseer had unpaid debt and needed to go to the bank to withdraw “cash money.”

“If I hadn’t heard about these scams before then I would have believed him,” Naseer’s daughter Amania, who was with her mother when the call came, told ARLnow.com. “He was so professional and very thorough.”

The caller wanted Naseer to go to Home Depot after she withdrew the $3,000 and add the money to gift cards. “He said, ‘put the phone on speaker so I know you’re taking out the money,'” Naseer said.

“I said, ‘there’s no point in talking to him anymore because I’m not going to do this,'” Naseer said. After she hung up, the caller called back twice. Naseer reported the call to the IRS, who said they received six similar calls.

Amania Naseer said that she was scared because the caller knew her family’s address. The caller also told them he would come to their house after Naseer paid to complete the “paperwork.”

The scam artist who called Naseer’s son said he was from his electric company, and that he would turn off power in their store unless they paid their supposed “bill” in 10 minutes. Naseer did not know if the same caller targeted her son, but she said he gave him the same set of instructions.

One of the victims Naseer knows is a government employee, according to Naseer. “He told me, ‘I’m working for the government too, so I’m hoping my money comes back,'” Naseer said.

The press release advised victims of these scams to report them to the Treasury Department at 800-366-4484 , or to file a complaint with the Federal Trade Commission and add “IRS Phone Scam” to the online form’s comments.