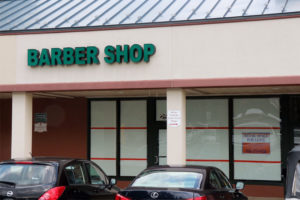 “It was literally there one day and gone the next,” Mary Barrett, who works next door as a marketing representative for MBH Settlement Group, told ARLnow.com.

Customers on the barber shop’s Facebook and Yelp pages lamented the loss of the business. Some Yelp reviewers wrote that free bottles of water, race car chairs, lollipops and balloon animals kept them and their children coming back.

Yelp reviewer Eric G. posted on June 10: “I’ve taken my two boys to Dan for years and we just walked up to the shop to find it closed with no forwarding address. Very sad, as despite the fact that he had fallen on hard times he was always very friendly and did his best to deliver quality service at a good price. We’ll miss Dan and I just hope he’s alright.”

Dan Woodley, the leasing agent for the space, told ARLnow.com that “Barber Dan” made a “personal decision not be a barber anymore.” Dan cut hair for more than 20 years, according to Woodley, and was a barber at Harrison Barber Shop for at least five. Woodley said he did not know exactly why the shop closed.

While many customers gave the shop rave reviews, others were put off by the wait. As the shop’s only barber, “Barber Dan” was not always able to meet demands. 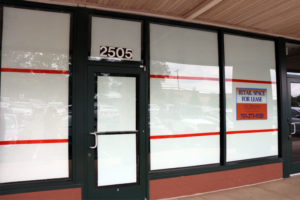 “A good haircut but a truly painful wait,” wrote Yelp reviewer Jim M. last November.  “Dan appears to have no appreciation of fact that people don’t like to wait while he shuffles around to adjust blinds, get the hit towel, fetch water for customers as they come in. I give up. There are now too many other options in the area with similar prices for boys and men’s haircuts.”

Barrett said that she first noticed the shop was closed two or three weeks ago, but that it remained busy until its final open days. “I was shocked when I pulled up one day and it was for lease,” said Barrett. Dan seemed to her a “friendly man” who was “always waving” and served many families.

Harrison Barber Shop had not posted on its Facebook page since last December, but customers continued to post praise and pictures as recently as June 5.

“Since Dan was a bit of an Arlington institution, having grown up in town (he went to Woodlawn for high school, he said), I’m curious as to what happened,” said former customer Anthony Zurcher, in an email to ARLnow.com. “My kids loved him and were regulars, as were many in the Yorktown and surrounding neighborhoods.”

“Dan could be slow at times — painfully slow. But that was part of his old-fashioned charm. He had a TV that would play movies for the kids — really just one move, Madagascar 2 (later, Madagascar 3) — which would be on a constant loop. I must’ve seen various parts of that movie dozens of times thanks to Dan, but my kids loved it.

At some point after I started going there, he learned how to make balloon animals — really just a sword or a poodle — for the kids. My boys always asked for one whenever they were there, and he always obliged.

I remember one time a patron showed up who was at least in his mid-90s. He had been coming to Dan to get his haircut for at least a decade. He inspired that sort of loyalty.”

Realtors A.J. Dwoskin & Associates have “over a dozen well-known Arlington businesses” interested in renting the space, according to Woodley. The firm will know more about the former barber shop’s future by late July.