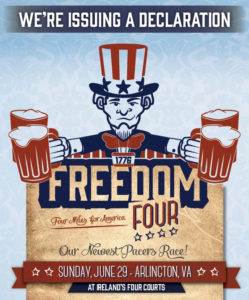 A new four-mile race will be held this Sunday morning from Courthouse down through Rosslyn and on Route 110.

The Freedom Four Miler is being organized by Pacers in partnership with Ireland’s Four Courts (2051 Wilson Blvd), which also serves as the race’s start and finish line. The race will begin at 8:00 a.m. and registration is $40.

It’s the inaugural running of the race, and it replaces the former Let Freedom Run 5K held in Fairfax County as the Fourth of July race in Pacers’ race offerings, according to Pacers Race Director Lisa Reeves.

Both four milers have the same basic course — a straight-line, turnaround course, traveling down Wilson Blvd and continuing on Route 110 before turning back in between Rosslyn and the Pentagon. The Arlington County Police Department has yet to announced the official street closures and times, but Reeves said roads will be closed on a rolling basis following the course. All roads should be fully open by 9:00 a.m., Reeves said, and closures will begin to go into effect at around 7:45 a.m.

“It’s a celebration-type race, that’s really what it’s all about,” Reeves said. “Having a good time with your friends and everything. We always encourage people to wear costumes, and we’ll have a photo booth with props like an Uncle Sam hat for runners and spectators to pose with.”