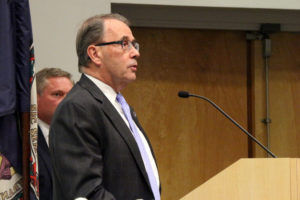 (Updated at 3:10 p.m.) Del. Bob Brink (D-48), who for the past 17 years has represented Arlington in the Virginia House of Delegates, announced his retirement today.

Brink will retire as of June 30. His 48th District includes Crystal City and parts of north Arlington and McLean.

Brink said in a statement that being able to serve in the Virginia legislature, which counts founding fathers Thomas Jefferson, James Madison and Patrick Henry among its former members, made him feel like “the luckiest guy on earth.”

It is “very likely” that Brink will be replaced in a special election in August, according to Arlington County General Registrar Linda Lindberg. The final order will come from the speaker of the House of Delegates.

Brink was reelected to a new two-year term this past November. He ran unopposed. He is leaving the legislature after accepting a position as Deputy Commissioner for Aging Services, Gov. Terry McAuliffe’s office announced this afternoon.

Delegate Bob Brink (D-Arlington/McLean), who has represented the 48th District in the Virginia House of Delegates for the past 17 years, announced Friday that he will retire from the House effective June 30.

“I’ve been honored beyond words to serve my fellow citizens as a member of the House,” Delegate Brink said. “But, ‘To every thing there is a season.’ It’s time for a new person to have this privilege, and it’s time for me to move on to new challenges.”

First elected in 1997, Delegate Brink is 13th in seniority in the 100-member House. He is the Dean of Arlington’s General Assembly delegation.

A member of the House Appropriations Committee and its Health Subcommittee, Delegate Brink cited as some of his proudest achievements in office his work on the FAMIS program which provides health coverage to children of the working poor, as well as efforts to maintain the health care safety net of services to vulnerable Virginians. The ranking Democrat on the House Privileges and Elections Committee, he has advocated for reform of the redistricting process and expansion of access to the vote for all eligible citizens. He also serves on the Education and Transportation Committees as well as on numerous legislative study commissions.

Delegate Brink has received recognition from a variety of groups for his service in the General Assembly. In 2013 the National Federation of the Blind of Virginia presented its Commonwealth Award to him for his efforts on behalf of blind and vision-impaired students. The Virginia League of Conservation Voters has consistently commended him for his legislative record on environmental issues. He headed the Virginia YMCA’s Model General Assembly Program board for a number of years and received the YMCA’s Service to Youth Award in 2001. He is a board member and former chair of the Virginia Foundation for the Humanities and also serves on the board of the Federation of State Humanities Councils.

Delegate Brink concluded, “On a personal note: A few weeks before I was sworn into office in 1998, I was in Richmond for freshman orientation. One night I took a walk around the Capitol and I stopped outside the House chamber. The curtains were open and the lights were on, and for the first time I saw the vote board with my name on it.

“I’ve looked up at that board thousands of times since that night. Some days it seemed like the only vote where I was in the majority was the quorum call. But every day, the knowledge that I’m one of a handful of Virginians whose numbers include Jefferson, Madison, and Patrick Henry made me think that I must be the luckiest guy on earth.”

Delegate Brink has lead an extraordinary career in public service. Having served our community for over sixteen years in the House of Delegates, he has accumulated a wealth of knowledge and experience that has helped him fight for Arlington’s values and priorities in Richmond. As a friend, mentor, and leader in the Arlington delegation, Delegate Brink’s presence in the General Assembly will be sorely missed.

For 17 years Delegate Bob Brink has brought Arlington’s values to Richmond in an outspoken, yet gentlemanly, way.

As a member of the House Appropriations Committee, Bob has played a key role in the financial stewardship of the Commonwealth. He was an early and effective advocate of Virginia’s Children’s Health Insurance Plan (CHIP). He is responsible for easing enrollment, expanding outreach and the increased enrollment of underprivileged Virginia children in insurance, improving health outcomes. Thousands of blind and visually impaired children have benefited from Delegate Brink’s work securing funds for specialized teaching assistance.

On a personal level, Bob has been a great friend and taught me a lot about being a legislator.

Though the people of Virginia will benefit from his services as he assumes the position of Deputy Commissioner for Aging Services in the Department of Aging and Rehabilitative Services, he will certainly be missed in the General Assembly.