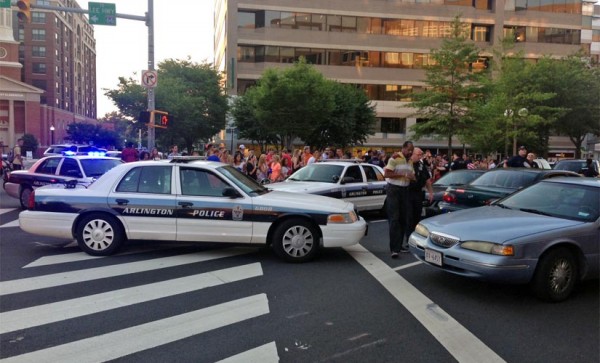 There was “chaos” on the streets of Clarendon Saturday night when a naked bar crawl attendee ran from police, hopped in a car and led cops on a high speed chase that ended in a crash.

Just past 8:00 p.m., police say a man who had been participating in the All American Bar Crawl stripped naked in Goody’s (3125 Wilson Blvd) pizza restaurant. The man, described as a black male in his 20s, left his clothes in the restaurant and ran outside, where police quickly gave chase, according to Arlington County Police Department spokesman Dustin Sternbeck.

The man hopped into a car — police couldn’t say if it was his car — and took off. Police cruisers followed, and chased the drunk man through an adjacent neighborhood. The man then made it back to Clarendon and started going the wrong way down Wilson Blvd, before striking two parked vehicles near the intersection with N. Highland Street, Sternbeck said.

The man — still stark naked — jumped out of the car window and started running, but was soon tased by police and taken into custody, according to Sternbeck. He was taken to Virginia Hospital Center as a precaution, and is expected to be booked at the Arlington County Detention Center tonight on numerous charges including indecent exposure.

A large crowd witnessed the incident, Sternbeck noted. One witness on Twitter said the largely intoxicated crowd that gathered started chanted “USA” as the nude man was detained.

NBC 4 tweeted the following photo of the arrest.

On #News4at11: Chaos in Clarendon after a naked guy fled a bar — and more mayhem followed: http://t.co/0BPHUx2xoj pic.twitter.com/N2myFjJ2hV