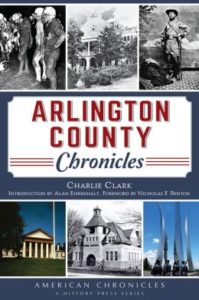 (Update at 12:25 p.m.) Over the years Arlington has been home to numerous eccentric characters and groups. And those local eccentricities have been faithfully chronicled by Charlie Clark, the man who writes the weekly “Our Man in Arlington” column for the Falls Church News-Press.

Clark peppers his columns with unusual people and Arlington history, and he saved the best 100 columns for his book, he said. Clark will discuss “Arlington County Chronicles,” which was published in April, at Arlington Central Library on Monday, July 7, at 7:00 p.m.

“It’s a little bit of history, public policy, baby boomer nostalgia and neighborhood flavor,” Clark told ARLnow.com. Clark will read from his book at the talk, cherry-picking ones that are “humorous enough in style to bear reading aloud.”

Included in the talk may be some nuggets of local history that attendees were previously unaware of. Readers may be surprised to learn from “Arlington County Chronicles” that:

Many of the included columns pay homage to the culture of Clark’s parents’ generation, especially his essay about attending “cotillion” dance lessons as an Arlington youth.

“They did a great job of trying to pass their culture on to us, and I feel a little bad that we were so tough to handle,” Clark said. “This is a thank you.”

An additional book talk will be Sunday, July 13 at Cassatt’s.