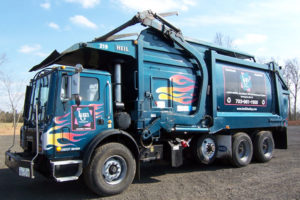 (Updated at 11:15 a.m.) Arlington County is being accused of “cronyism” and “underhanded tactics” in its attempt to award a contract for garbage, recycling and yard waste collection.

Bates Trucking — which was contracted for all of the county’s curbside recycling pickup and half of its trash pickup until the contract expired yesterday — is in the process of suing the county to prevent it from awarding all of its waste pickup to American Disposal. KMG Hauling, which also sued the county last month, handled the other half of the county’s trash collection.

The county has delayed its recently-approved year-round yard waste pickup program in light of the lawsuit. It canceled its one-year contract with American Disposal, but awarded the company an emergency services contract, for garbage and recycling pickup only, which took effect today.

Bates claims that its proposed contract was the best value and would have saved taxpayers money.

According to a Bates Trucking press release, the county’s now-canceled collection contract with American Disposal would have cost $15 million more over a period of 9 years than that offered by Bates, thanks in large part to Bates offering $9.45 million worth of free recycling processing.

Despite the unsubstantiated claim of “cronyism” in the press release, Bates said its lawsuit has merit and it hopes to continue serving Arlington residents.

“Our protest is not sour grapes or frivolous,” Bates Trucking President Bruce Bates said in the release. “Both incumbent companies are long time vendors for the residents of Arlington County. We have some real concerns over the practices that are being used to ‘usher in’ American Disposal Services, who has higher prices and less experience. Both Bates and KMG are local firms that have provided outstanding service to the residents of Arlington County. Bates wants to understand why we are being bullied and pushed out of the back door.”

The county has declined comment on Bates’ release or lawsuit. It did, however, release the terms of its emergency contract with American, which will reduce Arlington residents’ yearly solid waste disposal costs from $307.04 to $271.04 per year, until a full contract has been re-bid and approved. The Arlington County Board will vote at its meeting this month to reduce the solid waste allocation for FY 2015 by more than $1.1 million as a result.

According to Bates Chief Business Development Officer Willie Wainer, Bates has requested an injunction against the emergency contract, saying the county never put it out to bid as required by law.

“The county had the option, which was the most logical, to keep us in place since we knew the routes and knew the customers until they put a new bid or [request for proposals] on the street,” Wainer told ARLnow.com, “but they decided not to do so and gave American an emergency contract.”

Bates has been conducting trash and recycling pickup in Arlington for 17 years, Wainer said. It expects to put in another bid when Arlington re-issues the request for year-round collection. One anonymous ARLnow.com reader, in the comment section of the initial story on the lawsuit, says he was pleased with the former waste collection service.

“I can say without hesitation that the present garbage removal contractor does a fantastic job and I have to give them 100% marks in any assessment,” said “Bob,” who claims to be a Donaldson Run resident. “The county needs to issue a clarification as to why they have decided to change the garbage removal contractor and what cost competitive procurement process has been followed in selecting the new one.”

Wainer expects the injunction request to be heard in Arlington Circuit Court, where Bates and KMG filed their initial suits, within two weeks.