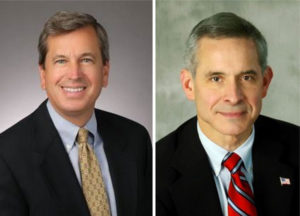 “I am pleased that even in the short time afforded by this special election, we will be able to discuss the issues,”  Foster said in a press release yesterday.

Foster is the former President of the Virginia Board of Education and an Arlington resident. He works as a partner in the Fulbright & Jaworski law firm in D.C.

Sullivan, a former Fairfax Transportation Advisory Commission member and Fairfax County resident and partner at Reed Smith law firm, called for a debate soon after he defeated six other candidates in the Democratic caucus on Sunday.

“I’m an issues-oriented guy, which is why I’ve served on boards and commissions dealing with housing, education, transportation, and legal policy over the last 25 years,” Sullivan said in a press release. “I look forward to a substantive debate where we can talk about the issues we’ll face in Richmond.”

Sullivan opposes widening I-66 inside the beltway and will try to “incentivize use of public transportation and expand mass-transit opportunities” if elected, according to his website. He supports Medicaid expansion in Virginia, increased gun control and reproductive health rights for women.

Foster is opposed to the Columbia Pike streetcar, and if elected, would spearhead a public referendum to end the project that he called “impractical and unaffordable.” Foster also “pledged to work for a solution to the Medicaid expansion controversy that has roiled Richmond this year,” according to his website. As a former Arlington School Board member, he said he supports “adequate funding and local decision making” for Arlington schools. Sullivan said on his website that he wants to “tackle the issues of overcrowding and larger class sizes currently facing Arlington.”

After the sudden resignation of Del. Bob Brink (D-48), who retired last month to serve as Gov. Terry McAuliffe’s Deputy Commissioner for Aging Services, Sullivan received more votes than six other Democratic nominees in the “firehouse” primary. Foster was the only Republican to run for the open seat.

In addition to the Arlington debate, another debate between Foster and Sullivan is scheduled to take place at the Fairfax Chamber of Commerce on the morning of Aug. 5.