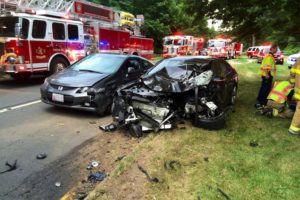 Investigators are hoping to learn more about a fatal wreck on the George Washington Parkway earlier this month.

The crash happened just before 4:45 p.m. on July 2. A black BMW traveling southbound near the first overlook crossed over the center median and collided head-on with a Hyundai SUV, according to U.S. Park Police.

The driver of the SUV, identified as Michael Poling of Vienna, Va., was flown to the trauma center at Medstar, where he succumbed to his injuries. The driver of the BMW was treated for non-life-threatening injuries.

So far there’s no word of charges being filed. Police are asking witnesses and those with information about the crash to come forward to assist with their investigation.

U.S. Park Police issued the following press release about the crash this afternoon.

On Wednesday, July 2, 2014, at approximately 4:43 pm units from USPP District Two responded for the report of a motor vehicle crash with one victim trapped. Fireboard and EMS personnel arrived on scene and extricated the trapped operator identified as Michael Alan Poling of Vienna, Virginia from the vehicle. Mr. Poling was transported by USPP Eagle 1 to Medstar where he later succumbed to his injuries.

The operator of the BMW was transported to GW Hospital by ambulance with non-life threatening injuries but was held for observation.

The Criminal Investigations Branch is asking for the assistance of commuters that were traveling S/B on the GW Parkway that witnessed the crash or that may have information. Anyone with information is asked to call the United States Park Police Tip Line at 202-610-8737.