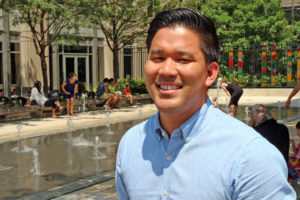 Josh Chao has a passion for clothing, fit and retail. When working as a consultant for Booz Allen Hamilton in D.C., he grew more and more aware of what a hassle it was to get clothes to fit well.

Chao started his company, Hopsak, last summer after taking a class at Georgetown University during his studies for an M.B.A. He wanted to get involved with something with retail, and after consulting with his professors, he started to narrow his focus on tailoring.

“I wanted to apply a small problem, figure out how to solve it and build a solid foundation,” Chao said while sipping from an iced coffee at Buzz Bakery in Ballston last week. “I took the problem that I’ve experienced in my own life, getting clothes that fit right.”

With that in mind, Chao set out to build a company that is “kind of like Uber for tailors,” although Chao said he’s hesitant to advertise the business as such because it’s not a perfect comparison. At Hopsak, a customer goes online and enters in alterations he or she would like to have, includes his or her measurements, and mails the clothes to one of Hopsak’s six tailors in its network. The tailor then mails it back — shipping is free both ways — and the customer has a tailored outfit without having to leave the house.

Chao knows that the large majority of people won’t trust their own measurements, despite a tutorial the website will include when it launches — planned for the end of August — and the opportunity to email tailors directly for help. 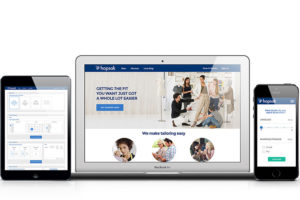 “There’s a lot of intimidation when taking your own measurements,” he said. “People like things to be smooth. When there are a lot of steps in it, it creates a barrier for action.”

To reduce the steps, Chao broke the tailoring down into four basic actions: lengthening or shortening sleeves or pant legs and taking a garment in or out. The vast majority of basic tailoring work, Chao said, are those four actions, and they’re also the easiest to measure.

No startup founder would willingly admit its consumer-facing product might be too intimidating to generate enough traction to support the company, but Chao devised a separate product aimed at retailers that he sees as the main revenue-generator for the company.

“We always knew that retail partnership would be our bread and butter,” Chao said. “For retailers, it’s an opportunity for those without the demand for a tailor on-site… A lot of retailers are having a hard time competing in today’s market, so we feel this is a tool for a better experience for this customers.”

The retail product works largely the same as the consumer version, except store employees can be trained to take customer’s measurements and send swaths of orders to tailors, as opposed to one at a time. The retail version is currently live and in a private beta version with a Georgetown suit maker. 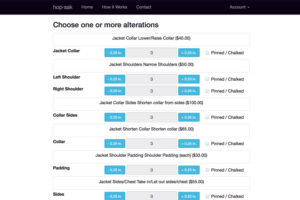 Chao said he will begin approaching retailers “willing to work with a startup,” but hopes to find stores “that have a passion for their product and care about their customers.” Chao has worked with D.C. sewing schools to learn more about tailoring and said his main goal is to empower independent tailors.

“I have a great appreciation of the craft,” he said. “I want to generate value to people for what tailors do. I feel tailors don’t get paid enough for the hard work they do. There should always be a spot for their craftsmanship.”

The tailor network, Chao said, is the strongest aspect of his company, with each tailor having a certain specialty. Some work best on suits, some on women’s clothing, others specialize in certain types of tailoring. Each garment is sent to a tailor who fits the task best.

“The people who care about fit want a way to do things easier,” he said. “When people buy stuff that doesn’t fit just right, it sits in the closet in a pile. We really want to make good-fitting clothes available to everyone.”

END_OF_DOCUMENT_TOKEN_TO_BE_REPLACED

More Stories
Morning Poll: Hot Enough For You?Scratching Post: When Did You Last Brush Your Teeth?