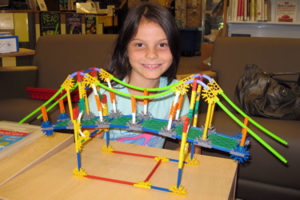 (Updated at 1:15 p.m.) Pre-schoolers and elementary school students can do a lot more than read at Arlington libraries this summer.

Early last month, Arlington Public Library rolled out seven STEM (science, technology, engineering and math) kits — one for each branch — to encourage children to get hands-on experience with science in conjunction with its science-themed “Fizz, Boom, Read” summer reading program.

“The kids can come in, they can play with the kits, they can read books that correspond with the themes,” Anne Womack, the library’s youth collections librarian, said. “We saw other libraries doing this, and STEM is really important, so we thought we should do it, too. The kits are something to make kids see that science can be fun and hands on.”

The kits are for engineering (as pictured above), earth science, the human body, insects, plants, a “snap circuit” for basic electronics and weather. Each one is designed so children can play independently.

“The girl who built the bridge in that picture, she did it on her own,” Womack said. “She read the instructions and just did it. It’s just hands-on science activities for the kids, not something that has to be parent or teacher-led.” 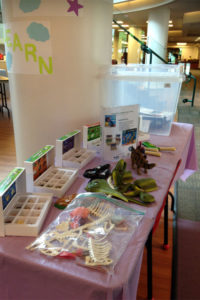 Each kit has components for young children and late-elementary schoolers. They were paid for and partly designed by Dan Cross-Cole, a retired engineer. Womack was sitting in her office early this spring when she was told “there is a guy in the lobby looking for you.”

It was Cross-Cole, who told her he “wanted to design some science projects for kids,” Womack said. Library staff had already been discussing building the kits because they had seen them at other library systems, so Womack instantly agreed. Cross-Cole arranged to have the project paid for by the Institute of Electrical and Electronics Engineers (IEEE).

“[Cross-Cole] was a miracle,” Womack said. “He just came to us out of the blue… [IEEE] paid for everything, and they’ve been really helpful in this process.”

The kits will rotate throughout the library system for the rest of the summer. After the summer reading program is finished, Womack said they plan to circulate them among the different branches of the library.