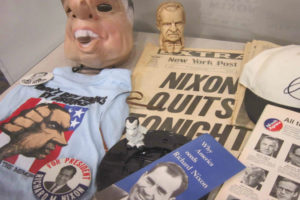 Tomorrow (August 9) marks the 40th anniversary of President Richard Nixon’s resignation from office in light of the Watergate scandal, and Central Library is marking the historic anniversary with a display of memorabilia and an author visit.

The library has a temporary display of Nixon-related items that visitors can check out through the end of the month. A private, local collector allowed the library to borrow the pieces of memorabilia covering the decades from Nixon’s 1950s vice-presidential campaign through his death in 1994. The display includes a couple dozen items including newspapers, masks and even a section of carpet from the Democratic National Committee offices at the Watergate — the target of the 1972 break-in that sparked a larger investigation.

The collector is particularly proud of a t-shirt from the late 1970s prompting readers to “Don’t Buy Books By Crooks.” It was part of a national campaign, started in Arlington, to encourage people not to buy Nixon’s memoirs. The headquarters for that campaign was located close to where the Ballston Metro station currently exists.

“We live in this incredibly fascinating capital area, and our national history often is also our local Arlington history in a lot of ways,” said library spokesman Peter Golkin.

On Tuesday (August 12), author Elizabeth Drew will visit the library to talk about covering the events surrounding the Watergate scandal, and about the reissue of her book “Washington Journal: Reporting Watergate and Richard Nixon’s Downfall.” She will reflect on Nixon’s ability to make a comeback and discuss what the scandal means in the 21st century. Copies of Drew’s book will be available for sale and signing during the event, which runs from 7:00-9:00 p.m.

“It’s a rare opportunity to hear one of the major journalists to cover Watergate speak,” said Golkin. He notes that although many Americans were focused on newspaper coverage of the scandal, Drew’s reporting was a major contribution because “her coverage in The New Yorker gave it a context you can only get from that kind of long-form journalism.”