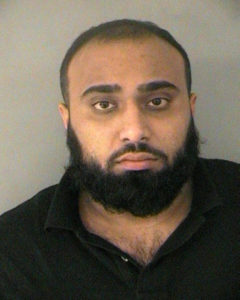 The driver who killed an Alexandria man in a drunk driving accident in Rosslyn on Jan. 24 pleaded guilty to DUI aggravated involuntary manslaughter today.

Aman Singh Lail, 24, was traveling eastbound on Lee Highway when his Jeep Wrangler slammed into the car of 24-year-old Saqlain Chowdhury at 2:09 a.m. Chowdhury was transported to George Washington University Hospital, where he died.

The accident happened a block away from where Lail’s friend, Sami Ullah, died after driving 90 mph over Key Bridge 10 months earlier.

Lail pleaded guilty in Arlington Circuit Court this morning, and will face sentencing from Judge Louise DiMatteo on Nov. 14.

Lail, a Baltimore resident, had almost three dozen traffic violations on his record in Loudoun, Fairfax and Arlington counties since 2008, including a driving while intoxicated arrest in Arlington in 2009 and a DWI conviction in Fairfax County in 2012, according to prosecutors. Lail faces between one and 20 years in prison.

“On Jan. 24, 2014, Aman Lail decided to endanger the National Capital Region by driving drunk,” Deputy Police Chief Daniel Murray said in a press release. “This decision cost Saqlain Chowdhury his life. The aggressive investigation and prosecution by the Arlington County Commonwealth Attorney’s Office and the Arlington County Police Department’s Critical Accident Team has resulted in today’s plea. While there is nothing that will bring Mr. Chowdhury back to his family, at least Aman Lail will not present a danger to the community as long as he remains behind bars.”

“The Commonwealth Attorney’s Office is pleased that the defendant entered guilty pleas today, but there are no good outcomes here,” Burkholder said. “Our thoughts continue to be with the victim’s family and friends as they struggle with this tragedy.”

END_OF_DOCUMENT_TOKEN_TO_BE_REPLACED

More Stories
Rip Sullivan: Why You Should Vote for Me‘Weapon and Gear Shop’ Plans Move to Nauck