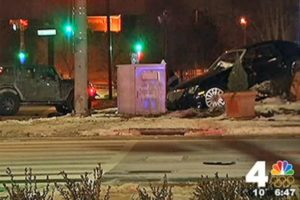 (Updated at 3:35 p.m.) Arlington County police are investigating a fatal accident that occurred overnight at the intersection of Ft. Myer Drive and Lee Highway, near the Key Bridge.

Police say two vehicles, a Jeep and a sedan, were involved in a t-bone collision around 2:00 a.m. The Jeep, traveling eastbound on Lee Highway, struck the sedan and a 24-year-old man in the sedan died, according to Arlington County Police Department spokesman Dustin Sternbeck.

The driver of the striking vehicle remained on scene and has since been charged with DUI and involuntary manslaughter. From an ACPD press release:

The Arlington County Police Department is currently investigating a fatal motor vehicle accident which occurred in Rosslyn at the intersection of Lee Highway and Fort Myer Drive at 2:09 AM on January 24, 2014.

A Jeep Wrangler, operated by Aman Singh Lail, 24, of Baltimore, Maryland was travelling eastbound on Lee Highway when it struck a Chrysler Crossfire being operated by Saqlain Chowdhury, 24, of Alexandria, Virginia.

Mr. Chowdhury was transported by paramedics from the Arlington County Fire Department to the George Washington University Hospital where he succumbed to his injuries.

Mr. Lail has been charged with Driving Under the Influence – Aggravated Involuntary Manslaughter. He is being held without bond at the Arlington County Detention Center.

The eastbound lanes of Lee Highway were closed for approximately five hours, opening shortly before 7:00 AM.

Police are asking anyone with information concerning this incident to contact Detective Sara Bertollini of the Arlington County Police Department’s Critical Accident Team at (703) 228-4243.