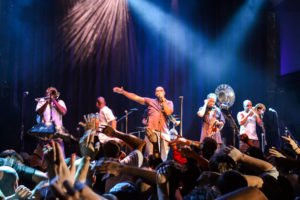 The annual Rosslyn Jazz Festival returns next month, and will be headlined by New Orleans staple Rebirth Brass Band.

On Saturday, Sept. 6, from 1:00 to 7:00 p.m. in Gateway Park (1300 Lee Highway), four jazz bands will take the stage while attendees can enjoy a picnic, food and fashion trucks and beer and wine.

This year, the Rosslyn Business Improvement District is hosting its 24th jazz festival, and once again it’s free to attend. Parking is available in the garage at 1911 N. Fort Myer Drive, and several streets around the park, including Lee Highway, will be closed from 7:00 a.m. to 8:00 p.m.

Rebirth Brass Band formed in 1983 and has released 12 original albums. Its latest album, “The Rebirth of New Orleans,” won the 2012 Grammy for Best Regional Roots Music album. The band plays traditional New Orleans brass music, but blends in aspects of jazz, funk and hip-hop. They take the stage to close the festival at 5:30 p.m.

Opening the festival at 1:00 p.m. will be The Corey Wallace DUBtet, led by trombonist Corey Wallace. At 2:15 p.m., the Ghost Train Orchestra, a 10-piece jazz band that plays modern revivals of 1920s and 1930s-era jazz hits, will take the stage. Following them, at 3:45 p.m., North Indian-jazz fusion band Red Baraat will bring their eclectic blend of music influence for the festival’s penultimate performance.

Beer and wine will be provided by the Washington Wine Academy. Several food trucks will be parked at the festival, along with fashion trucks Street Boutique and The Thread Truck.