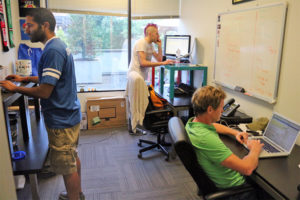 Most people who have played recreational sports have experienced at least one frustration associated with the leagues: everything that doesn’t involve playing in the actual game.

Making the peripheral parts of rec sports easier was the stated goal of LeagueApps when it launched in 2011, and the company has tried to do just that for a growing roster of 600 leagues around the country. LeagueApps provides a platform for leagues, such as Arlington-based D.C. Social Sports, to manage registration, payment, rosters and other processes that go into organizing rec sports.

“We offer an all-in-one solution for your sports league,” LeagueApps Director of Product Management and “point guard” Gautam Chowdhry told ARLnow.com from LeagueApps’ ÜberOffices space in Rosslyn. “A lot of leagues now are doing things on three or four different systems. They’re managing the league with an excel spreadsheet or they’re using another software that’s not optimized for sports teams.”

Rec sports have significantly increased in popularity in the last five years, Chowdhry and Chief Product Officer and co-founder Steve Parker said. That’s especially true in the D.C. area, where the populace’s transience lends itself to “social sports” leagues, which revolve more around making friends and drinking than other rec leagues. 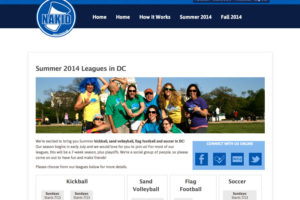 LeagueApps was originally a sports Meetup-type company called Sportsvite, which is still around and owned by the same group. Launched in 2008 as a way to bring people together to play sports, Parker and his co-founder Brian Litvack soon found that the greater demand, and opportunity, was in making the leagues more accessible and functional online. In 2010, the group decided to pivot, and launched LeagueApps a year later.

“Our ultimate goal to make the experience in participating in sports for the players, parents and coaches easier and more enjoyable,” Parker said. “What you’re doing on the field is what matters. That’s where the fun is, that’s where the excitement is. Everything around that is friction and a nuisance of logistics.”

This year, LeagueApps started catering to youth leagues as well, trying to gain a foothold in a market that’s 10 times the size of adult sports. “It just made sense to tool our product so it could work in both markets,” Parker said.

The company started out bootstrapped, Parker said, but they’ve taken a few rounds of angel investments as they’ve grown. The team is now up to 22 people with office in New York City and San Francisco, as well as Rosslyn. Later this year, Parker said, LeagueApps is eyeing a Series A funding round to carry out their ultimate vision of a complete platform with new levels of service.

“We ultimately want to transform the experience that people have when they participate in sports activities,” he said. “That means a better experience, mobile, re-thinking all the things they do, how they engage with that sports experience, engaging with the league itself, the participants. We’re in the early stages of conceiving that.” 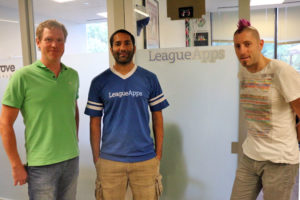 What might that look like? For starters: mobile integration; a more simple way of communicating with teams in the league and among teammates that goes beyond an email thread; and incorporating photos and social media.

Making a registration platform fun seems an unlikely ambition, but Parker and Chowdhry are building toward making LeagueApps the complete experience for everything that doesn’t happen between the sidelines.

“We want to help with communications,” Chowdhry said, “whether it’s a team chat about who’s going to be there or recapping that amazing touchdown pass you caught or the tackle you broke.”

“People want to be able to share these moments,” Parker added. “Extend these moments that happened, something cool in the form of comments and photos. Imagine snapping a photo, tapping a button and it’s instantly shared to everyone participating in that game… We want to extend the experience of sports beyond the part that happens of the field.”