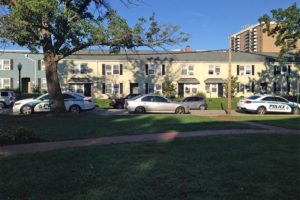 An Arlington man has been arrested and charged with a stabbing that occurred overnight, about four blocks away from the Virginia Square Metro station.

Police say a group of people were drinking heavily inside a home on the 3500 block of 8th Street N. in Ashton Heights Sunday night. Around midnight, a verbal dispute escalated into a physical confrontation and a 25-year-old man was stabbed outside the house, suffering two puncture wounds to the chest and numerous slashes to the chest and back, according to Arlington County Police spokesman Dustin Sternbeck.

The victim was transported to Virginia Hospital Center. His wounds are described as non-life-threatening.

Arlington resident Rafael Temaj-Jiguan, 30, was arrested by police officers who were executing a search warrant on the residence this morning. He has been charged with malicious wounding and is being held at the Arlington County jail.

Temaj-Jiguan was an acquaintance of the victim, Sternbeck said. He was previously arrested in Arlington last September and convicted on a charge of being drunk in public.