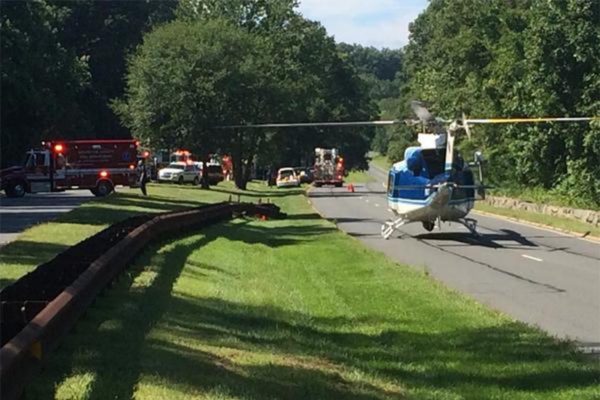 (Updated at 4:35 p.m.) Arlington County firefighters and paramedics responded to a serious multi-vehicle accident on the GW Parkway this afternoon.

The accident happened just after 2:00 p.m. near the Windy Run overpass, northwest of Spout Run. Three vehicles collided in the northbound lanes, sending one of the cars off the roadway and down an embankment, nearly to the Potomac below.

Two people were in that car; at least one was trapped following the accident and had to be extricated by a rescue team.

One of the victims was flown to MedStar Washington Hospital Center, via a U.S. Park Police helicopter, with serious, potentially life-threatening injuries, according to Arlington County Fire Department spokesman Lt. Sean O’Connell. The other victim in the car was transported via ambulance to George Washington University Hospital with serious but non-life-threatening injuries.

A third person was injured in one of the other cars involved in the accident. That individual was transported to Virginia Hospital Center with moderate, non-life-threatening injuries, O’Connell said.

All lanes of the GW Parkway were closed between Spout Run and Route 123 following the accident, according to WTOP. Closures remain in place as police investigate the wreck.