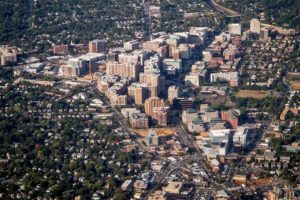 A new, county-funded study, polling young professionals who live and/or work in Arlington, found those who live in the county do so because of their job, not necessarily because of its amenities or social scene.

“Arlington County does not appear to be an area [young professionals] consider initially beyond a focus on a job opportunity,” the study’s authors, two AED interns, write. “It is not a place with YPs who have strong roots there or who are moving there for the people. With this being a strength, Arlington County should lead with jobs when promoting the area to YPs. During a time when it is hard for young people to find a job, this may prove a great strength for Arlington.”

“There is a great opportunity among those who only work in the County to showcase the reasons why Arlington is a great place to live,” the study says. “These respondents are not likely to recommend Arlington County as a place to live and when asked if they were to consider living in the County, only three in ten say they would. One of the goals moving forward should be to decrease these gaps.”

The top reason among those who work, but don’t live, in Arlington for living elsewhere was the cost of housing.

“I couldn’t even rent a spare bedroom for under $1500 in a decent neighborhood,” one respondent said. “Rent/housing is way too expensive.”