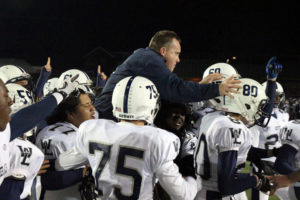 Washington-Lee won that game, 10-0, capturing its first district football title in 38 years. Yorktown went farther in the playoffs — losing to Lake Braddock in the quarterfinals — and Wakefield improved from 0-10 in 2012 to 3-7 under new coach Wayne Hogwood.

All will have to put last year behind them tonight when the open their season. Washington-Lee opens at home tonight against McLean, Yorktown will host Langley and Wakefield will go on the road to face Marshall. All games are scheduled to start at 7:30 p.m.

Gone from the Generals and Patriots are many of the stars of last year’s big game, including Yorktown running back M.J. Stewart who is now at the University of North Carolina, set to play in his first game tomorrow after being suspended for last week’s opener. The Patriots will also miss defensive lineman Logan Robinson, who is playing for The Citadel. Head coach Bruce Hanson says quarterback Joe McBride, lineman Quinn Cox and linebacker/fullbacks Jack Storrs and Sean Coleman will be called upon to lead the revamped squad.

“You can’t replace M.J.,” Hanson said. “M.J. scored 79 touchdowns and rushed for 4,800 yards in three years, plus who knows how many balls he caught. It’s certainly going to be hard to replace him offensively, but we feel like we have a competitive team. I don’t know how our record is going to be, we’re not going to be a pushover.”

The Generals will sorely miss three-year quarterback start Sam Appel and top wide receiver/defensive backs Trevor McManus and Noah Harrington. They return just three starters on both offense and defense, but one of those starters is running back Daquay Harris, who was a huge factor for last season’s district champs. He’ll team with senior quarterback Ronnie Fesco to lead the Generals’ offense behind an experienced offensive line.

“We graduated 25 players and 12 starters, so we’re looking for guys to fill in,” Washington-Lee head coach Josh Shapiro said. “Unfortunately, that leaves a lot of holes, so we’ll start to learn a lot about our team tonight. It’s hard, because you just don’t know what you have yet.”

Hogwood and the Wakefield Warriors are having a different training camp. Other than losing the team’s all-conference guard in David Benford and top receiver in Marcus Boyd, the Warriors bring back everyone from last year’s 3-7 unit. Hogwood said quarterback Riley Wilson, who transferred into the school last year, has become one of the team’s leaders, as has guard Ryan Jones.

“I feel really good at this point in the year,” Hogwood said. “I think we’ve got some guys that have been committed and in our program for a year now. We’re a little bit smarter, stronger and older from last year. I fully expect us to build on the three wins we got last year.”

Each coach is cautiously optimistic about his team, but the Arlington schools aren’t gaining much recognition from the region. There is not one mention of Yorktown, Wakefield or Washington-Lee in the Washington Post’s several-thousand word 2014 football season preview. Amazingly, not a single player from the three schools even garnered an honorable mention in the Post’s preseason all-star teams, which feature well over 100 players from around the region.

That fact didn’t faze Hanson, but he said he’d put the Arlington trifecta up against most of the teams in Northern Virginia.

“We’re going to beat some Fairfax schools, I can guarantee you that,” he said.

Hayfield is the favorite to win the National District this year — all three coaches agreed on that — and Wakefield is pegged as a candidate to finally rise from its doldrums. The Warriors haven’t won more than five games since 1983, but it looks like that streak could be broken this year. Hanson predicted a 6-4 finish for the Warriors and praised Hogwood’s coaching ability; not a surprise considering Hogwood was an assistant at Yorktown for years before taking the main job at Wakefield last year.

“We want to play more than 10 games this year,” Hogwood said. “If we win more than five games, then we’re guaranteed a spot in the playoffs. This year, we want to go on a playoff run.”