Last week I recapped the first weekend of my recent Southern California vacation, which included a trip to San Diego County for Stone’s 18th Anniversary Party and a tour of the brewery itself, along with a great lunch experience at the Stone Bistro and World Gardens. This week I’d like to tell you about the other brewery visit I had while I was staying in Los Angeles — to The Bruery, in Placentia.

Depending on where you’re staying in L.A., you can get to The Bruery’s Orange County location within an hour or two (I was staying near LAX, and the drive took about 50 minutes in late-morning traffic), though with the tasting room opening later in the afternoon most days travel time is subject to the whims of the freeway gods. I mention the tasting room hours because tours of The Bruery are currently on hold; I was lucky enough to be shown around thanks to The Bruery’s Virginia distributor setting me up with Jonas Nemura, Senior Director of Operations and Distribution for The Bruery.

As I mentioned last week, most brewery tours are fairly similar experiences, but what fascinated me at The Bruery was how different their approach was compared to Stone. Both breweries aim for world-class quality and expression of style in their beers, but for all of its experimentation Stone is much more in the “traditional” mold — around half of the production at Stone’s Escondido brewery is dedicated to their IPA, which is their flagship beer. 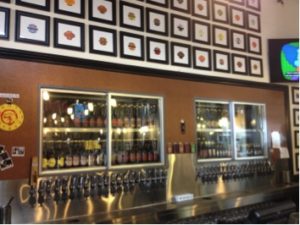 Not only does The Bruery not have a flagship beer, but when one of their recipes began to show signs of becoming a flagship, they stopped making it — such is their dedication to an ever-changing lineup with an emphasis on trying new things and being on the experimental edge of the beer industry (there’s a reason I called The Bruery “fearless” when I wrote a short profile on them back in 2012).

Even as someone who works in the business with an appreciation for what The Bruery does, it can be jarring to hear a business plan that so diverges from the norm. The thing is, it’s working; when I visited, The Bruery was working on yet another expansion, gobbling up even more of the warehouse-like storefronts its complex occupies.

In six short years, The Bruery has become a name known to beer lovers worldwide — one synonymous with boldly-flavored, cutting-edge Belgian-style, Sour, and barrel-aged beers. A special treat during our tour of The Bruery was a stop in its barrel-aging warehouse. We were led to a nondescript office building a block away from the main facility, and upon entering the combined aromas of oak, bourbon, and other assorted barrel varieties smacked us in the face.

Walking into the warehouse itself was like entering a real-life treasure trove: somewhere between 10-12,000 square feet of space with rack upon rack of wooden barrels. It was like the warehouse at the end of Raiders of the Lost Ark — except for beer.

Mind you, none of these contain The Bruery’s vaunted Sour Ales — those are created and aged in a different facility about three miles away. Part of The Bruery’s evolution involved moving Sour/Wild Ale production; fresh wort is even trucked over to the sour house (my phrase, not theirs) so all fermentation involving Brettanomyces and The Bruery’s souring bacteria can take place away from the regular production line, all part of an effort that should help avoid some of the cross-contamination issues that have occurred with a handful of beers in the past.

I recommend going in a small group like I did (my wife and best friend came with me); The Bruery’s approach is one that involves a lot of styles that aren’t for everyone, occasionally delving into “extreme” beer territory. Unlike other breweries that forge their own path however, The Bruery’s wide-ranging lineup is welcoming to all palates, truly offering something for everyone to enjoy. My best friend is not a Sour Ale fan, and my wife is not into aggressively hoppy beers; all three of us found brews that we enjoyed at the tasting room.

Because of the spectrum of beers The Bruery offers, telling your server that you’re not a fan of a particular beer won’t elicit any of the exasperated sighing or beer geeksplaining from the crew there that you might in other places; just suggestions on what you might enjoy trying next.

And there’s almost always something to try next. A visit to The Bruery’s tasting room involves grabbing a piece of paper and selecting a handful of beers to try (in two-ounce sampler glasses) for a flight — kind of like a sushi place. Once again, thanks to the kindness of Jonas and the crew at The Bruery, we were allowed more than the five samples that come with the typical flight, and we allowed access to beers typically reserved for members of their Preservation Society and Reserve Society. My wife and I both enjoyed Atomic Kangarue; a Reserve Society beer that was essentially a funky Blonde Ale featuring The Bruery’s house yeast strain, a Brett strain, two different hops, Semilon and Viognier grapes that is then blended with a Sour Ale before being dry-hopped with Amarillo. The floral notes of the hops melded beautifully with the wild yeast, and their careful addition avoided the beer becoming too bitter, which in this context would have been distracting.

I loved versions of personal favorite Sours like Oude Tart (this one aged with plums) and Sour In The Rye (with pineapple and coconut), and discovered some new treats like Dad’s Infidelity (a Saison aged in wine barrels with two Brett strains that had crazy berry-like flavors). My best friend warmed up a little to Soroboruo, a sour-ish Wee Heavy with heather, but really got into the Bourbon barrel-aged version of Smoking Wood; a 13 percent ABV smoked Rye malt Imperial Porter (you may still be able to find bottles of Bourbon barrel Smoking Wood around here; the “standard” Rye whiskey version is more widely available).

Everyone fell in love with Loakal Red; a hoppy Amber Ale more in line with the SoCal beer scene (The Bruery has famously toed a line of not making any IPA, ever — and infamously gone on to produce several versions of Humulus, a very hoppy Lager). What made Loakal Red work for everyone is the fact that a quarter of the beer is aged in oak barrels, which ‘cuts’ the bitterness factor of the beer enough for all kinds of beer drinkers to enjoy it.

What I took away from both of my brewery visits was a renewed sense of optimism for the future of beer: as different as Stone and The Bruery are from each other, there is no sense of competition there — no accusations of one or the other doing the “wrong” thing. Both breweries are striving to elevate the standards of the art; both want to use the best ingredients possible to make the best beer possible. Both approaches work for both breweries, as well as their fans. If you can, I highly encourage visiting both.

For more, including full tasting notes for the beers sampled at The Bruery, stop by my blog where I go into even more excruciating detail. Next week: wrapping up with an East Coast perspective of the California beer scene — the good, the bad, and the hoppy (which can alternately be good and bad). See you then!