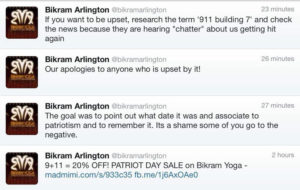 Twitter users told the company they were appalled by the reference to the tragedy.

“Kind of disgusting to promote shop sales with a Sept. 11 discount. Shame on you, @bikramarlington,” user @Melissaeweiss wrote.

Courthouse resident Angela Herrick, 32, said a Facebook post from the yoga studio about the sale appeared alongside a post remembering her friend’s father, who was killed in the Pentagon.

“A tragedy like this should never be used to promote a business, period,” Herrick told ARLnow.com, noting she had frequented the studio since 2011. “I will not be returning, ever.”

Bikram Arlington then tweeted, “The goal was to point out what date it was and associate to patriotism and to remember it. Its [sic] a shame some of you go to the negative.”

“Apologies to anyone who is upset by it!” another tweet from the company said.

That tweet was was quickly followed by a suggestion to search 9/11 “truther” conspiracy theories.

“If you want to be upset, research the term ‘911 building 7’ and check the news because they are hearing ‘chatter’ about us getting hit again.”

The studio’s promotion page added more color on the deal: “Freedom Isn’t Free — And we intend to honor those patriots who have died for our country and morn [sic] the loss of freedom of speech and other rights that died day.”

Studio owner Zahra Vaezi, whose husband, Frank, wrote the tweet, told The Washington Post that she “didn’t realize people would be so ‘roar,’ you know?” over the promotion.

“It’s like that man who punched his wife,” she told the Post, referring to ex-Baltimore Ravens running back Ray Rice. “I mean, that’s upsetting. But I think it kind of gets blown out of proportion.”

@bikramarlington You demonstrate an incomprehensible lack of compassion—in the town of the Pentagon, no less. Hoping you learn & improve.

@bikramarlington @stcolumbia Holy jeeze, when you're in a hole, quit digging

Maybe they are right. Maybe Arlington actually has no soul. pic.twitter.com/6kUrbhLfBs