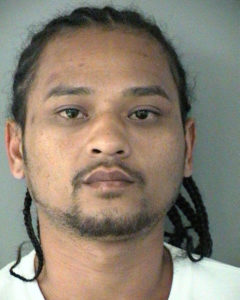 A robbery suspect is facing a host of new charges after police say he tried to pass himself off as his brother following his arrest.

Police say Mora Long, a 26-year-old Sterling resident, was the man captured by Arlington County’s SWAT team early Wednesday morning on Four Mile Run Drive. Police and news outlets initially reported that 29-year-old Rattana Long was arrested, but police now say that Mora was pretending to be his brother in order to have an alibi for the robbery.

The robbery took place Friday afternoon on the 5000 block of Columbia Pike, when a man matching Long’s description robbed a store at knifepoint.

In addition to a charge of assaulting a police officer while allegedly trying to evade arrest, Moran Long is now facing charges of “providing false identity to law enforcement, four counts of forging a public document and identity theft.”

The Arlington County Police Department’s Homicide/Robbery Unit has charged a suspect after he provided a false identity following a seven hour barricade situation that ended in the early morning hours of September 10, 2014. Mora Long, 26, of Sterling, VA has been charged with assault on a police officer, providing false identity to law enforcement, four counts of forging a public document and identity theft. At the time of his arrest, he was wanted out of Prince William and Fairfax Counties for additional crimes. He is currently being held in the Arlington County Detention Facility without bond.

Following an armed robbery of a retail store in the 5000 block of Columbia Pike on September 5, 2014, officers conducted extra patrols of the surrounding area. An individual matching the robbery suspect description was spotted by officers in the afternoon hours of September 9, 2014 in the Columbia Pike Plaza Shopping Center. That individual, Mora Long, was immediately approached and interviewed by officers. During the interview, Long assaulted an officer and then fled on foot to his girlfriend’s apartment in the 4500 block of S. Four Mile Run Drive. Long barricaded himself in the apartment until Arlington County Police SWAT entered the residence at approximately 2:00 am and found the suspect in a bedroom closet.

Long initially provided officers with his brother’s identification as it would provide him with an alibi in connection to the September 5th armed robbery and because he knew he was wanted on multiple charges out of other jurisdictions.

Long has not been charged with the armed robbery as that incident remains under investigation by the Arlington County Police Department’s Homicide/Robbery Unit. If anyone has information in regards to the September 5, 2014 robbery of the MetroPCS store in Columbia Pike Plaza, please contact Detective Everest at 703.228.4180 or [email protected] To report information anonymously, contact the Arlington County Crime Solvers at 866.411.TIPS (8477).

Read more →
More Stories
Your Beermonger: California Love (Part Three)Letter to the Editor: What, Exactly, is a ‘Weed?’