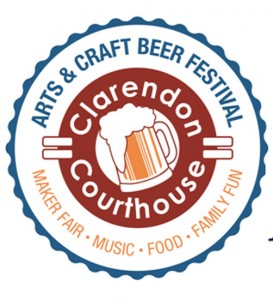 A new festival will bring craft beer, art vendors and music to the surface parking lot in Courthouse next month.

The Arts & Craft Beer Festival is planned for Sunday, Oct. 12 from noon to 7:00 p.m. in the lot along N. Courthouse Road, next to the Arlington County Justice Center. The festival will cost $10 for general admission and $35 for admission with 12 tasting tickets and a 5.5-ounce tasting glass. Beer tickets can be purchased online.

The festival will have two beer stations. Six Virginia breweries will serve their suds at the first station, called the Electric Stage Beer Pavilion: Lost Rhino, Williamsburg Alewerks, Wild Wolf, Crooked Run Brewing Company, Port City and Champion Brewing Company. These companies will offer two tastings apiece and compete in four categories. Awards will be given out for most-consumed beer, best dark beer, best “not so dark” beer and people’s choice brewery. The Electric Stage will feature eight musical acts throughout the day, including Derek Every and His Misanthropes, The Caribbean and The Raised By Wolves.

The other beer station, called the Acoustic Stage Beer Gardens, will feature national craft brewers not eligible for the competition, according to event organizer the Clarendon Alliance. The gardens will also be where artists perform on the acoustic and songwriter stages. Nine artists are performing on the acoustic stage, and 11 artists will grace the songwriter stage.

A total of 24 artists and vendors will sell their wares from tents.

“These incredible Artist-Makers will create and sell everything from clothing to art, jewelry and items of wood, clay and whimsy. You will find things as yet undiscovered and collectible for the taking,” the event’s website says.

Once expenses for the festival are recouped, the Alliance said, proceeds will benefit Songwriters and Poets, which coordinated the music acts, Arlington Independent Media and the Clarendon Alliance. The Alliance hopes to make the festival an annual event on the Sunday of Columbus Day weekend.